I’ve done that summery thing and watched old episodes of NCIS every now and then. Somehow it gets boring when all current shows come to an end every May, and there’s only so much Good Wife-watching a witch can do in one fell swoop.

I’ve been quite lucky, remembering the odd old episode that I’ve barely, if ever, watched a second or third time. This week I misremembered which episode I was after, meaning I got to watch both of them, and both were great, especially for not being worn out.

And then, as I was seeing the credits flash by, I suddenly remembered Quinn. It’s amazing how both season 14 and Jennifer Esposito had totally slipped from my memory.

I need some more oldies. And it seems as if the later episodes of most seasons are the least likely to have been watched too much. Take season 12, episode 21. It was one I was reluctant to return to for various reasons, but when I did, I discovered it was virtually perfect!

Well, what to say? Most people have already said it all, and it’s interesting to see how many anti-female-Doctor fans are out there. (What about the Master? And him fancying Missy? That’s weird enough.)

I really don’t care, as long as the new Doctor can act, and they get a decent script to work with. I don’t know Jodie Whittaker at all. I like her surname. She looks nice in general. I’ll await the future and see what I think.

Perhaps it was the sex-change aspect Peter Capaldi was referring to when he hinted that the next re-generation will be more difficult? We’ll see.

Another thing that surprised me this week was an informal poll on social media as to people’s favourite assistant. Bill came last or second last with most who took part. And as I said before, I think she’s the best we’ve had. I don’t get it. The last few episodes of this season of Doctor Who proved her greatness, as far as I’m concerned. 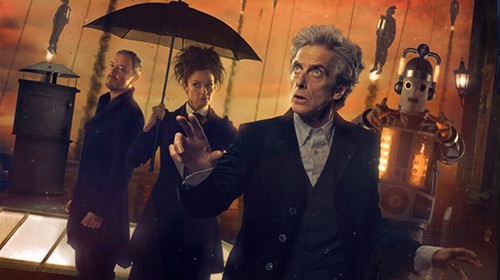 And that of Peter Capaldi. He has done extremely well this season. I don’t want him to go, but I reckon that’s why he should. Let him leave on a high.

Spent a couple of days last week watching the last two thirds of season ten with Daughter who had lagged behind for various reasons. It was good to see most of them again in quick succession, and watching again meant I noticed details I’d missed.

I’ll miss Bill, and I’ll miss no.12. But the others have become good friends, so I see no reason why no. 13 can’t win me over as well.