Wanting to ascertain more definitely whether the problem between Pauley Perrette and Mark Harmon stems from Mark’s dog’s attack on a crew member, I will only say that it’s a strange coincidence, date wise, if it isn’t something to do with Dave.

And we know what Gibbs says about coincidences.

Also, sixteen stitches is quite a lot. Especially if it’s your body.

My research has taken me as far as season 14, episode 7, which was screened on 15th November 2016. Home of the Brave it’s called, and it’s a pretty good one, with the possible exception of Quinn’s odd behaviour. It’s also the first episode – if you watch season 14 backwards, as I’ve been doing – that seems completely normal.

Abby and Gibbs interact as always, for about as long as you’d expect, and there is a kiss. The first one during my research viewing. Still no offer of a Caf-Pow from Gibbs, although there has been the odd drink from the others, when they call in at Abby’s lab. Because that’s the thing; as long as someone asks Abby about what she’s found, it takes a while to discover it’s not Gibbs doing the asking.

So I’ve been looking for normal conversation lasting reasonably long, Caf-Pow and kissing.

I’ve no idea when an episode goes live, how long it has been after it was recorded. Depending on a variety of facts, I imagine at least a few weeks, in which case a mid-November screening fits in with having been filmed maybe up to a month before.

The Dave incident happened ‘last week’ according to about four different reports in the press, all dated 26th October 2016.

Whether any of this relates to the flipping of episodes eight and nine, I have no idea. But it’s as annoying now as it was then; with Reeves and Torres chatting perfectly normally in the Thanksgiving episode, and being introduced to each other in the next, a couple of weeks later. Also, there is talk of an election in episode nine, which is surely wrong, when you vote in early November, but this was on one month later.

All this is too late to undo, now that we are about three weeks off Abby’s departure. It’s not just season 15 suffering from the split Gabbs scenes. Most of last season had it too, the decline gradual but palpable.

Watching the ‘next’ episode, i.e. no. six, brought home to me how very normal it was. And I remembered how we used to say that Abby seemed to have been sidelined after Quinn and Torres joined the show. Strikes me now her role was made smaller for another reason. We believed it was the new situation with the other agents to get used to, and the loss of DiNozzo.

I wonder what Michael Weatherly would have done about Dave?

We got to chatting about actors who have appeared twice on NCIS, Daughter and I. Purely to relax, obviously. Also obviously, actors appearing twice as different characters. She mentioned one, while I could only remember another.

He was up a ladder outside a hotel room in one episode. Very briefly. ‘I think it was in Once A Hero,’ I said. I’ll have a look. ‘That’s season four,’ Daughter pointed out. ‘I know, it’s episode eight, if I’m not mistaken.’ (She was a bit put out by that…)

And once I found him – it was Francesco Quinn – I located the other episode, which was One Shot, One Kill, where he had a slightly longer part, although he died pretty quickly there too. Reading on about Francesco I discovered that, sadly, he died in 2011. Also that he was the son of Anthony Quinn, which was obvious when I knew, but I’d never thought to look him up on IMDb before.

The actor Daughter had had in mind was Clyde Kusatsu, and when we moved on to him I remembered both his roles, but felt he wasn’t quite as obviously the same actor. Benjamin Franklin, made fun of by DiNozzo, was rather different from Ducky’s gardener and very good friend of Mrs Mallard’s, in The Tie That Binds.

In fact, the reason Francesco Quinn was so much more memorable, is that the episodes were older. That was back when we watched them ‘quite a lot.’ Whereas the gardener appeared in last year’s NCIS, which I might have watched once, maybe twice. And I absolutely couldn’t have named the season or the episode.

These days I don’t even have time to misspend my time.

I’ve done that summery thing and watched old episodes of NCIS every now and then. Somehow it gets boring when all current shows come to an end every May, and there’s only so much Good Wife-watching a witch can do in one fell swoop.

I’ve been quite lucky, remembering the odd old episode that I’ve barely, if ever, watched a second or third time. This week I misremembered which episode I was after, meaning I got to watch both of them, and both were great, especially for not being worn out.

And then, as I was seeing the credits flash by, I suddenly remembered Quinn. It’s amazing how both season 14 and Jennifer Esposito had totally slipped from my memory.

I need some more oldies. And it seems as if the later episodes of most seasons are the least likely to have been watched too much. Take season 12, episode 21. It was one I was reluctant to return to for various reasons, but when I did, I discovered it was virtually perfect!

Wow. They really can do it if they try. Was this week’s NCIS a happy accident, or have they been listening? Or, perish the thought, had they kept a little something extra good up their sleeves in case the world needed cheering up?

I’ve been watching some old episodes this week, so feel quite confident in stating that Keep Going would have fitted in well in almost any of the older seasons. The middle ones. Some of the flashbacks coincidentally were from the episodes I watched. Weird. 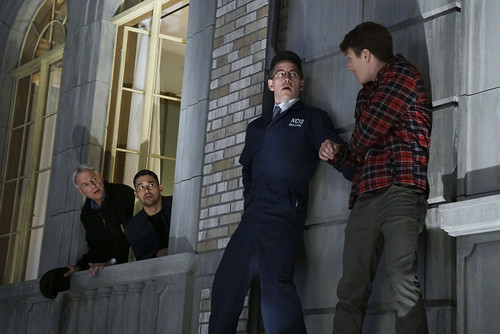 So, first they actually wrote a good script. Then they directed it extremely well. They let Palmer be the main character, with Torres the only newbie there for him. And there was admirably little to be seen of Quinn. Gibbs behaved just as you’d expect him to, which means that he was back to old, normal Gibbs. The kind of Gibbs you don’t think about, because he just is.

Abby was given more time than of late, which is what we want. There was more life to McGee, and Ducky was Duckier than ever. Bishop was OK, and did I mention that Quinn didn’t get enough of an opportunity to annoy?

The vertigo was more than real. I almost fell off my armchair watching the street down below. Palmer was scared and not abnormally brave standing on that ledge, working hard to persuade the suicidal young man not to jump. He gave so much of himself. The flashbacks were clever, in that we both got to see snippets from the good old days of NCIS, but they also fitted in with the story, which isn’t always the case.

So it was feelgood on two fronts; story with wow factor, and revisiting the past. You could tell the end was coming, but it was no worse for being obvious.

So, they could have killed Quinn.

Instead they had to go and ‘write out’ someone else from the show. Was it the viewers not wanting anything muslim-friendly that did it? I had even been watching Willoughby thinking it wasn’t bad. For season fourteen, I mean. It had things to recommend it.

And the end; not even a ‘to be continued.’ Although it feels as if this is another bad guy who has to be chased through a few episodes before they get him.

Strangely enough, while missing this episode for over a week, for various reasons, I’d been thinking back to season three, the first episode, and how I cursed myself for arranging to host a dinner party that night. I recorded NCIS and then couldn’t sleep, so got up really early the next morning and more or less cried my way through it. Then watched it again, crying almost as much, and it wasn’t until I woke Daughter and watched it for the third time with her, that I was almost back to normal.

Whereas this time I didn’t mind the wait from the week before the week before Christmas. They need to bring some of that sense of expectation back. I believe NCIS can be rescued, despite DiNozzo’s departure. As long as someone does something about Quinn.

Really? They flipped their episodes round? You can’t introduce the team to Clayton Reeves now, when Torres was talking to him two weeks ago.

The episode before last was the very worst I’ve seen, and that’s saying a lot. What were they thinking? Quinn fantasising about Gibbs, and him letting her?

Made the mistake (see, told you!) of checking what people on Facebook thought. Basically that if they are going to be muslim friendly on NCIS, they will stop watching. So that’s reassuring to know. And it appears the new British Prime Minister is a fan.

And then this week we’re back to crap again. Except, if they made the programmes in the opposite order, there is still hope for the post-Thanksgiving one, yet to come. A date for Vance? Well, maybe it’s time. I almost hoped he’d opt for the night security detail.

There is still time to sort this show out! But the scriptwriters need to sharpen their wits and the directing needs to be better. And perhaps if Mark Harmon showed a bit of interest…

At last, an almost normal episode! Back on a ship, even if it’s called Love Boat. It sort of brought back the N in NCIS.

Glad to see Gibbs must have wrestled his leather jacket off Fornell. Made him look slightly less formal, but not necessarily more Gibbsy. And what’s the matter with all these people? They get seasick! They work for the Navy! 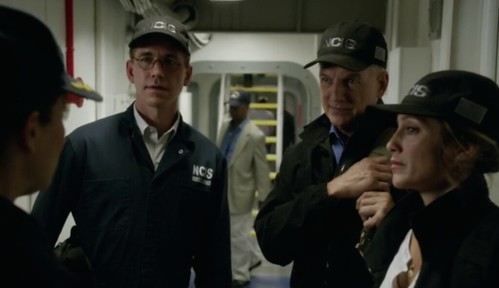 Good to see they actually had a female commander for once. Also that she wasn’t quite as barky as so many of the men have been over the years. And we had a small child, a celebrity, love affairs, as well as general sneakiness.

McGee really needed to get his act together, and I was starting to feel this would drag on all season, but luckily you can use that lift for almost anything. Great to have Delilah back. Much better than just talking about her. 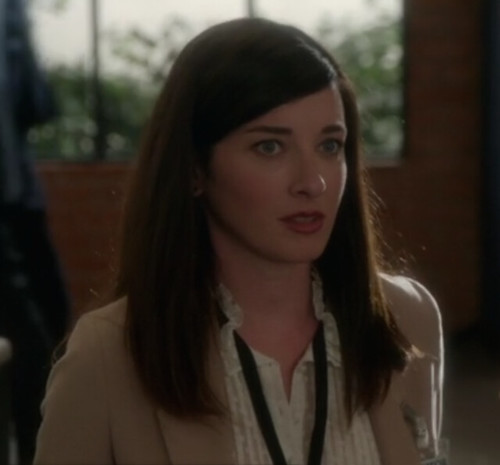 Still not enough of Abby or Ducky, even if Palmer was allowed out on his own. It will be interesting to see if this is a trend, or a one-off. We need to make friends with everyone, and soon. 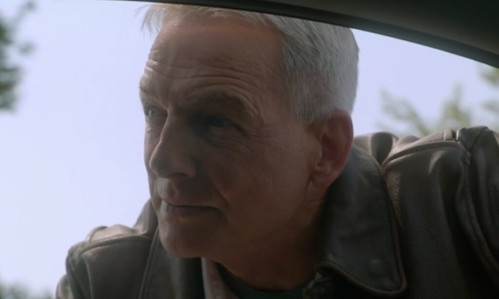 Facelift? I don’t know. Gibbs looks almost his old craggy self at times. But there is definitely something film star-ish about the man.