There was just one thing I wondered about in 1982. Who’s Terry Wogan? His name was everywhere, and that was without me even ‘looking.’

As is always the case when everyone seems to know something that you don’t, you sort of hesitate to ask. In case it makes you look stupid. So I didn’t ask about this Terry Wogan, but as chance would have it, when the Resident IT Consultant departed for his early train to London every morning, I switched the radio to Radio Two, and after a while I discovered that I was listening to Terry most mornings.

It was very nice, rather like having a kind and intelligent friend come round. This was in the days when there wasn’t so much entertainment available; we had no television, for example. And obviously none of the timewasting things we all enjoy today.

There was just Terry. And to me he was such a radio person, that when we eventually had a television and he was on it, I felt it wasn’t quite right. I did come to expect him for Eurovision and Children in Need, but radio is where Terry belonged.

We liked this one, Daughter and I. It’s rare to sit through a whole episode actively thinking ‘this is good.’ And we both knew who ‘did it’ too.

There were even some scenes on ships, which we used to have so much of in the early years and now hardly ever. (As they said on LA the night before; the N in NCIS stands for Naval, so you might as well expect some boats.)

Didn’t quite get Bishop’s letter to President Truman. Apart from some weirdness, I felt it changed tack towards the end. 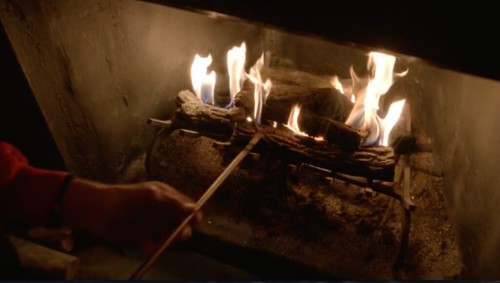 But you could tell that there would be this nice warm feeling towards Gibbs, and this really did change the meaning of sleeping with the boss. (Although, if those were all McGee’s clothes, he has a very limited wardrobe for someone living in DC. Get the boy a wooly jumper!) 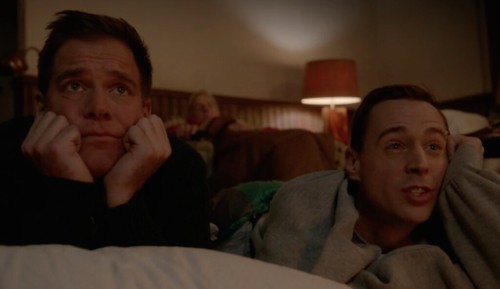 Nice to meet McGee’s rubbish friend again, even if a corpse in the rubbish is slightly lacking in originality.

Thinking about Alan Rickman’s films on Thursday, I was struck by an urgent need to watch Galaxy Quest again. So we did. It’s the kind of genius comedy that should be watched regularly, which we haven’t done, but might do from now on.

We saw it in the cinema when it was new, but it felt like not many people did at the time. We got the video and made good use of it for Son’s birthday party soon after, as a film that would appeal to the age group, but was unlikely to be known to the other boys. That turned out to be right, and Galaxy Quest was also a hard act to beat, or even match, for subsequent parties.

The Star Trekky-ness of it is fun, but all the humour works even if you have no idea what Star Trek was, or the relationships between its actors. And Galaxy Quest has the best taking-out-the-rubbish-and-recycling scene I know.

Time means you forget some details, which then can come back and be almost as good as new when you see them again. I particularly enjoyed the bit where the other actors, minus one, arrived on the spaceship and were freaked out by the aliens, who turned ‘human’ shape by the time the last of the group caught up with them and who had no idea what all the excitement was about.

It’s possible to go on and on about it and its perfection, but I won’t. Watch it – again – if you haven’t already. I believe I will. It was the only thing to do on a day that brought us the news of Alan Rickman’s far too early death. 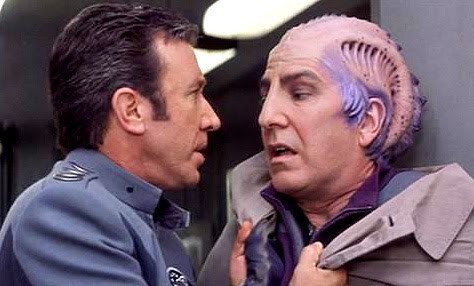 The show must go on.

My age and personal inclinations meant I had no interest in David Bowie when he started out. Over the years nothing changed, except it was clear that he wasn’t a one year wonder, but someone with a long and lasting career, and with countless fans.

I appear to be friends on facebook with most of them, if today’s outpourings of grief is anything to go by. I’m sorry about that, but glad for their sakes that they had someone who meant so much to them for so long. That is very special.

At first when the news came, I was confused, as I was fairly certain David had been in the news just a few days ago. Several times, in fact. I was right. It was his birthday, and he had a new album out last week.

Sister City, parts I and II

I’ve not watched NCIS: New Orleans for the best part of a year. That didn’t seem to matter much when my hand was forced this week. I did get a five minute summary from Daughter on what has happened in New Orleans, but I’d say that apart from one new character, who seemed all right, it was mainly Brody’s hair (which I didn’t like) that was new. So was Gibbs’, in a new hair-old hair kind of way. Thank you.

It’s clever to combine two episodes like this; one after the other, the way the two shows would come anyway. Better than the old ‘to be continued’ routine, and presumably good – even necessary – for New Orleans. Might be an idea to do more crossovers.

I liked Luca Sciuto, despite him being a little annoying, not to mention naïve, and I could just about suspend disbelief over yet another team-related involvement in the ‘crime.’ But I checked, and it looks as if the two episodes were not only written by different people, but had different directors as well. Which shows, and is why I have more or less given up on the New Orleans show. It’s just too weird.

How many recurring characters can they get away with killing off? It was obvious what was going to happen, since we clearly couldn’t lose Luca before we even met him. Someone had to die. (I suppose they will have to introduce replacement recurring characters; someone who might be bad, but whom we learn to like as we get to know them.)

As I said, I liked it, but the first episode was the stronger one, and it makes me wish they could have done it in the reverse. Somehow.

Something old, something new

Television at Christmas is like a table groaning under the weight of cake. Too much all at once. But it isn’t necessarily good cake. And it feels sort of wrong to be offered so much all at once – especially if you have other things to do – when you go so long wishing for worthwhile programmes at other times of the year.

And in reality, I have watched less than planned, and the other reality is that I have probably spent more time watching unplanned, old stuff, than the new films and series made specially for the last two weeks.

OK, I quite liked Sherlock. Many viewers didn’t, from what I’ve heard. And yes, the scriptwriters do appear to show off, which isn’t always an attractive trait. But shortly before Sherlock, we were eating our dinner in front of the television and simply needed something suitably timed to fit in right then, which is why we watched the second half of The Terminal (all right when you’ve seen the whole film before). I’m tempted to say that Tom Hanks can’t do anything wrong, and that half a Terminal trumped Sherlock.

On Christmas Eve someone else did the cooking, leaving Daughter and me with a couple of free hours as we waited to be fed. In the end we relaxed with two old Christmas episodes of NCIS, and felt much better for it. (The baby born in a garage, and DiNozzo Sr misbehaving.)

Christmas Day is a busy day without adding visual entertainment, but we obediently sat down and watched the two obvious programmes; Doctor Who and Downton Abbey.

As with Sherlock, Doctor Who was fun enough, but not as good as it could or should be.

And then it was Downton. Very silly, but oh so enjoyable! And most civilised of them to want to tie every last little thing up, with a happy ending for everyone (except for Matthew’s mothers’ new husband’s daughter-in-law).

Downton will be a hard act to follow. I reckon you could find fans to chat to all over the world. Like the Forsyte Saga, maybe, or Dallas.

Not being a regular viewer of University Challenge, I’ve been a bit hit and miss over the years. I did enjoy most of last year’s Christmas specials, and it’s something the Resident IT Consultant and Daughter and I can share.

This year I knew I wouldn’t forget, as the captain for the Manchester team happens to be a facebook friend. Not someone I know well, but it’s nice when something good happens to anyone you’re even a little connected to. 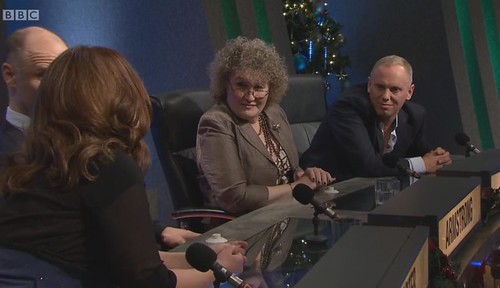 So I knew which team I was going to root for, and I did think they were a particularly good team. Well matched, and all four buzzed and contributed.

Christine Burns kept us updated online on what it had been like, without ever putting any spoilers out there. I am ‘borrowing’ some of her pictures. 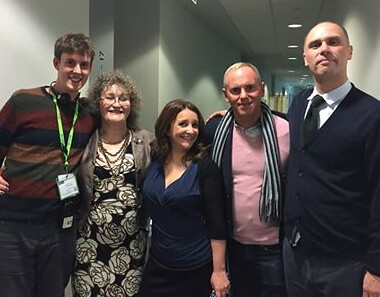 I’m not the greatest fan of Jeremy Paxman, but he does do rude comments very well. He’s refreshing that way, so different from fawning television presenters, who smile and say bland things.

After the rather good team from Sheffield stopped Manchester’s hope of a place in the final, we wished Sheffield would win. Nicci Gerrard confirmed my theory that authors are good allrounders. Last year I enjoyed Philippa Gregory’s efforts on Christmas University Challenge, and this year it was Nicci who impressed.