The demise of DiNozzo

I’d better speculate while there is time. I don’t think anyone on the outside knows yet how the scriptwriters are planning to get rid of Very Special Agent Anthony DiNozzo. But do it they will.

The main question for me is whether NCIS will survive DiNozzo-less. And also, how do you get rid of a longstanding friend, a joker, and someone much loved by many fans?

So far most characters have had to die when the actor leaves. Mike Franks’s ghost comes back every so often, so I assume it wasn’t the case that Muse Watson wanted out forever. Kate died and Ziva didn’t. But Ziva was pretty safe left alive, as she had a faraway country to go and live in. They probably would have had Kate back had Sasha Alexander wanted to, but instead they invented the sister she never had.

Could we bear it if DiNozzo is killed off? Is it not contrary to his persona? But if left alive, what would prevent him from turning up every now and then? And is this the end of DiNozzo Sr as well? To some he is as dear as Jr.

Will McGee step into Tony’s shoes? I’d have thought they can’t just replace him with another senior agent, especially considering the fact that DiNozzo should have had his own team to lead years ago. He’s only still there for plot purposes.

Give Ps a chance

As if we didn’t have enough watching to fit in anyway, more turned up a few weeks ago. I was most excited about The Great Interior Design Challenge, but for some reason it paled after watching just once and we couldn’t muster the stamina to return to it. I do like the interesting houses they find for the keen interior design hopefuls to ruin and to obsess over, but it suddenly hit me that specialist Daniel Hopwood is merely a hairdresser who does homes instead of heads. On television.

But Michael Portillo on the Great American Railroad Journeys has been fun. OK, so he took several days [programmes] to even leave New York, but among the sightseeing there’s enough trains and tracks and station buildings to satisfy. Who’d have thought all those years ago that we’d willingly watch this Conservative politician travelling the world by train? (I think we have had a personality shift here; Portillo was of the ‘wrong’ political persuasion, but he’s a normal human being. His successors are something else entirely and will never get anywhere by train.)

Jeremy Paxman’s University Challenge is a programme you don’t have to watch every week. It’s fun enough to dip into if you have a spare half hour, if only for his marvellous rudeness towards the contestants. I do find though, that I can’t even begin to hope to answer more than a question every now and then. Correctly, I mean.

And then we have the lovely Piers [Taylor]; the architect who helps people in dire homes and with little money to do something spectacular to their houses. I’m interested to see that they dropped the presenter from the first series, letting Piers present as well as architect his way around. The fact that he has architect helpers now, proves that his is not a lone voice in a design desert. I was actively invigorated when the charming Sikh architect went out of his way to help ‘his’ home owners reuse stuff and to buy the cheapest, and occasionally unexpected, materials. I will have the wetroom I want, rather than the wetroom the shops want me to have. He said something rude about tiles being common. I love him!

It is hard keeping track of who has died when you’re living in exile. There are two categories of people I’d know about if I hadn’t left the country of my birth; famous people [but not so famous that their deaths are reported internationally] and local people [to me] that any remaining friends I have would know that I’d want to hear about.

The Retired Children’s Librarian has done a sterling job over the years by keeping a deathlist. In between our phone calls, she writes down who has died, and when we have spoken, she rattles off the dead ones. Some I will know about, because they made it into a British newspaper. Others I won’t, and I’m grateful to be told. She also has a fairly good grip on who I’m most likely to be interested in.

Dead local ordinary people is the hardest. Mother-of-witch would tell me the names of those she knew, but of course, there are always names that wouldn’t have meant anything to her. And it is quite hard to find out if someone is still alive, once you’ve tried the phone directory [which tends no longer to be very effective].

My reason for talking about deathlists here is that today I read a Swedish magazine article about someone famous and long dead. There had been a television programme about her, in which ‘the late’ Alice Babs had taken part. That was the first inkling I had that Alice Babs is dead. Not surprising, though. She died two years ago at the age of 90, which is pretty good going. And when I searched, I found that she made it into the New York Times, but that was probably mainly the Duke Ellington effect.

I have blogged about Alice once before. I still maintain that her Swe-Danes album is one of the best ones I own.

Wow! That was an episode to take you back to the beginning! Almost, anyway. 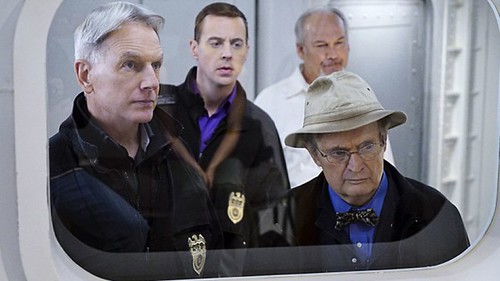 Locked-room mystery on a ship, with the agents helicoptered across, and Ducky doing a remote autopsy. Great stuff. Add to that a bit of Valentine’s agonising (seriously, tofu hearts?) and I’d say the scriptwriters have nailed it.

Decompression sounds truly awful, and here you can see how unappetising it might be to share your small chamber with a corpse for four days. Whether it’s better or worse once you’ve tried to autopsy your ex-workmate, I have no idea. 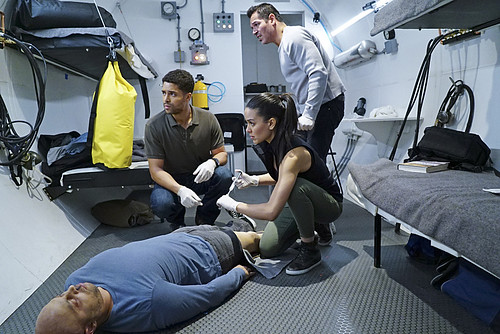 I thought the captain looked fishy. But the lawyer obviously took the biscuit for any fishyness, admitting to having been born without empathy. And with three equally bad looking potential murderers, the question was who to pick.

That mess room looked awfully familiar. It reminded me of the submarine in season one, and that is a very long time ago. I really must watch all the episodes in chronological order, again, some time. Shouldn’t take more than a year. Or two.

The question is, dare I hope for similar quality next week?

A very long time ago

I was at the dentist’s yesterday morning, and managed to pay some attention to what was on the radio, while also being crowned and glued and whatnot.

They were looking back on the long career of Terry Wogan. Radio Two, not the dentist. So there were snippets from Eurovision, with a pretty hilarious voting commentary between Norway and Sweden.

And then Terry was heard to reminisce on the big changes to Eurovision after ABBA won in 1974. They played Waterloo, and while I didn’t quite lie there singing along, it was still fun.

The dentist asked me if I could remember this. I said that yes, of course, I could. I didn’t tell him exactly where I was or what I was doing, but I do remember. I wasn’t an ABBA fan in those days. (My dentist, who is a very lovely dentist, won’t have been born then.)

And the next thing he asked was whether the members of ABBA were well known in Sweden before Waterloo. I said they were, but didn’t dare point out I’d been a fan of BB almost ten years earlier. And more recently one of the As. He’s very good with general knowledge stuff and irrelevant facts, and can manage a long conversation on exoplanets if he has to. But clearly not ancient ABBA facts.

You had to have been there.