She was right, the blog reader who thought I might know about Pam Dawber’s dress. She was also wrong, because I had to look things up, but it wasn’t exactly hard research.

Pam was photographed wearing a rather fetching dress at an event for Stuntmen’s Association last year.

And my eagle-eyed reader then found Pam wearing the same dress back in 1967, but while she wondered about the rich and famous recycling their wardrobe, she also felt it did seem far too long ago. It was. Pam would have been 16 at the time, twenty years before she married Mark Harmon, who was also in the photograph. I can’t afford Getty prices to use photos, so can’t show you, but the link takes you there, and it does say 1967.

That’s when Dr Dolittle the film premiered. I would guess that the Dr Dolittle premiere Pam and Mark were seen at might have been the stage production in 1998. They look about right for it to have been then. And the dress would have been a mere 15 years old when it came back out for the Stuntmen.

I reckon even Hollywood stars recycle. Pam strikes me as the kind of woman who  would. And unlike my reader and me, the dress still fit her. 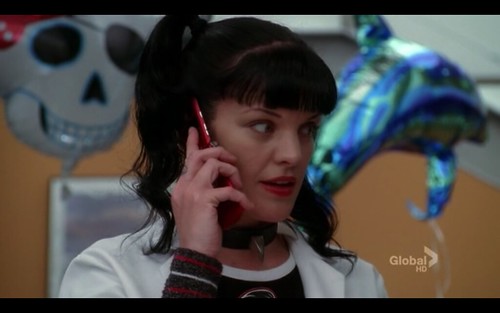 Pauley Perrette is 45 today. Perhaps Abby Sciuto is as well, but we are less sure of that. Gibbs seems to understand that Abby’s age might be a touchy topic of conversation, so it’s never been confirmed, as far as I know.

Abby does know how to celebrate, though, so I’m guessing there is cake in Valencia today. Balloons.

I wasn’t going to blog until next week. But very briefly, I liked New Orleans. Very much. Nearly everything was good.

Please keep this up!

There is a team in New Orleans, they call NCIS, and it’s been the ruin of many a poor crook…

Sorry. I’ll stop while I can.

I was reading about New Orleans  a week or so ago. It seems as if the place has picked itself up after Katrina, and there’s a lot of good stuff happening. Before that article I hadn’t stopped to think about why CBS might pick New Orleans for their next spin-off attempt.

It sounds as if there are tax breaks for making films, which could be one reason. Or it could simply be that it’s the new exciting place to go. Or that they can support the rebuilding of the city by sending over a successful hit show.

I’m obviously speculating now, before the new NCIS reaches the small screen near you this week. Whereas I wasn’t too impressed by last year’s LA spin-off, I have no reason to be pessimistic about this one. I reckon a ‘real’ NCIS spin-off might stand a better chance. Gibbs has more power than Callen.

Let’s just hope it’s not too hipster-ish, but more genuine New Orleans. And I see both Fornell and Franks are appearing.

Too old to insure

The closer I get to being 70, the younger it strikes me as an age you could be. There was finally another newsletter from Natalie Whittaker earlier this month, which ‘as usual’ was full of illness, operations and housing disasters. The Whittakers certainly know how to live a life full of stuff happening.

Apparently Roger completed his ‘farewell’ tour last year while in dire need of an operation, and he did it because he’s too old to be insured for the cancellation of concerts. Mrs W now reckons he will not tour again. I suspect she’s right. Sensible, definitely.

It wasn’t at all what I’d imagined. I suppose I was simply a bit careless and thought it’d be a touching story about a hotel concierge. In the hotel, I mean.

And it was, but only up to a point. M. Gustave reminded me somewhat of a holiday manager I encountered more than once, but I believe M. Gustave was far kinder and had rather more finesse than Mr B.

The crazy plot about a hotel concierge who sleeps with all the female guests, but who is both kind and friendly towards his recently employed lobby boy, young, stateless Zero, ought not to work. But it does.

When an old customer dies, the two travel to her stately home to pay their respects. They end up stealing a valuable painting and escaping the long arm of the law. There are some sad deaths, and when M. Gustave ends up in jail, it falls to Zero to run the hotel, as well as get his lovely girlfriend to bake cakes with files in…

Nice, light fun. No need to take it – too – seriously, and if you don’t, there is no need to be disappointed in the film. More big actor names than you can shake a stick at.

NCIS – Rock and a Hard Place

Could have done with a Gibbs-Palmer hug. But I expect that was too much to ask for. Gibbs did the stern, almost angry, thing instead. (I still think a home made baby would be by far the best under the circumstances.)

I could pick out the bad guy from the word go, but then mystery is not what’s important. It’s the show as such, and what a show!

Slightly weird plot, but enjoyable. Amusing parallels in the case and in the so called real life for the team. Palmer about to have a baby. Keith Carradine’s character discovering he already had one. Palmer running out, followed by DiNozzo running on a totally different kind of errand.

As the guy at the beginning said; ‘what could possibly go wrong?’

The wedding of DiNozzo Sr will obviously go wrong at some point, but not for want of McGee’s napkin folding knowledge.

Bishop was behaving almost normally for an NCIS agent. Please let her stay normal. Although if someone could point out that talking loudly as you’re sneaking around a possible crime scene, isn’t the most discreet thing to be doing, I’d be grateful.

There was more black humour in Temporal than was comfortable. I suppose it wasn’t meant to be a picnic, or even close to walking barefoot on the beach, as the call centre ladies dreamed about.

Times are bad, and we know they are very bad in Spain. Temporal was a day in the life of a small group of temps, and while it didn’t get worse, it certainly didn’t get better, either. Not much hope anywhere.

If you try to complain you end up feeling grateful you are allowed to keep your job afterwards. In the call centre breaks were something the workers could only dream about, along with wanting a holiday in Varadero.

The poor guy who sold – or tried to sell – vacuum cleaners could have been given a better script to work from. Very short shorts seemed to help Rosario/Jenifer in persuading passers-by to stop and talk to her about crisps.

This was a hard film to understand, or like. Why didn’t they stand up to their employer? Why did they let people walk all over them? Unemployment, and the wish to eat today. And tomorrow.

I truly hope I will not take pity on my cold callers in future. I still don’t want what they sell, nor can I afford it. I can see why the workers try to make a living out of this hopeless task. But why does someone want them to do it in the first place? There can be no money in it.

We could have done with finding out about poor Jenifer.

(At Cornerhouse on March 20th.)

Once we’d got rid of the half dozen young men who were in the wrong cinema (they left to the acompaniment of much hilarity), the gala opening of the 2014 ¡Viva! at Cornerhouse went well. A brave woman made a speech in Spanish, and then the ¡Viva! head film-picker spoke (in English), before handing over to the director of Días de vinilo, Gabriel Nesci, who said a few words.

Gabriel explained his early fascination with vinyl records and he reckons his film began being written when he was twelve. He loves Britain and he has clearly been influenced by The Beatles as well as the low key retro, more introverted style of making films in the UK, as opposed to the flamboyant exuberance you tend to expect from Latin American films.

Días de vinilo follows the friendship of four young boys into adulthood. A couple of decades after they were inadvertently showered with LPs from an overhead window, they are trying to deal with being adults. One of them, Facundo, is marrying his girlfriend of ten years. The other three have relationships breaking up, and all are fairly useless around women. If they can pick the wrong woman, they will.

Damián is a screen writer (Gabriel’s alter ego?), Luciano DJs on radio and Marcelo has a Beatles tribute band, The Hitles, forever hoping to win tribute competitions that would bring him to the promised land that is Liverpool. Marcelo – as John Lennon – has a bit of a Yoko Ono complex, which is not helped when his telephone love Yenny proves to be more Japanese than Colombian.

Luciano is hopelessly in love with the singer Lila, who goes through men like there’s no tomorrow. And Damián is pursued all over town by exactly the right girl, except he doesn’t (want to) realise.

A little slow and un-Argentinian, this film could do with being watched again. I’m sure there are many nuances I missed the first time round. The actors do a great job, and apart from the glamorous looking cemetary salesman Facundo, they are genuinely ‘the boy next door.’

This is a comfortable film, rather than maniacally racy. Quitely funny instead of being a farce. Still quite Latin American, for all its quietness, since their British counterparts don’t talk or behave as openly as this. All You Need Is Love, as the Rolling Stones so famously sang (sic.)

Cornerhouse invited people round for drinks and music afterwards, and possibly even dancing. I didn’t stop to check.

And if anyone wants to know more, Gabriel Nesci will do a Q&A after the screening tomorrow afternoon, and if you miss that, the film is also shown on March 19th.

Finally! We’re back to what almost counts as normal NCIS. Granted, it had Robert Wagner in it, and – probably because – it was the 250th episode. It even had a Naval flavour, what with proper uniform being an issue. No boats, but you can’t have everything. (I know; ships.)

Not bad at all.

There was a lot of DiNozzo hugging going on, but this time there was a good reason for it. What are the odds that Jr kills someone, with Sr as the only witness? Might this have been the last outing of daddy DiNozzo, I wonder?

Bishop was barely annoying this time. She’s learning a few things, and they are definitely giving her the probie treatment. It’s refreshing having a beautiful female agent who is married, and who does not have to be matched up with every available male within miles.

Speaking of relationships, McGee’s sounded pretty normal too. Let’s keep it that way.

And I hate admitting this, but DiNozzo made a very fetching Private Eye. Very. Just don’t anyone tell him that.