There are many questions you can ask after watching Hacksaw Ridge, the true story about the man who refused to carry a rifle in WWII and who saved countless soldiers’ lives, and was awarded the Medal of Honor.

Did it have to be so violent, and did it have to show quite so many dead and maimed soldiers? In this instance less would definitely have been more. Besides, you see less of the film if you have to look away a lot of the time. 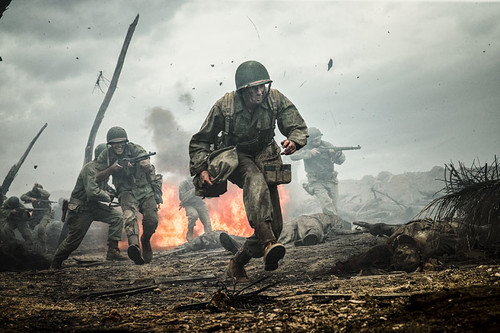 Couldn’t it have been clearer about when the earlier parts were set? We had to look it up, to ‘unconfuse’ ourselves.

And might it have been better to stick to what surely must have been rules back in the 1940s, like did nurses have long flowing hair on duty?

But the main question must be, if Desmond Doss was able to save 75 wounded soldiers at Okinawa, through sheer determination; how many unnecessary soldier deaths have there been in all other battles before and after?

I am not wanting to complain that others have not done what he did. You need a strong character and plenty of courage to achieve even a fraction of what Doss managed. But seeing that he could return out on to the battle field over and over again, and come back with more and more wounded comrades; how many half dead soldiers do armies leave behind everywhere?