Before I have to light my pumpkin, here are some spiders, courtesy of Abby: 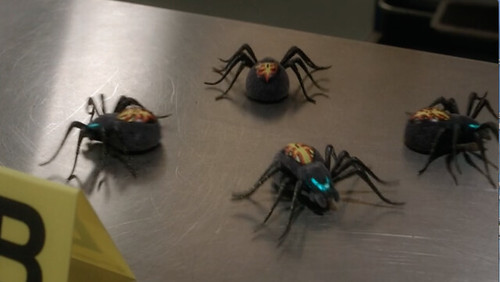 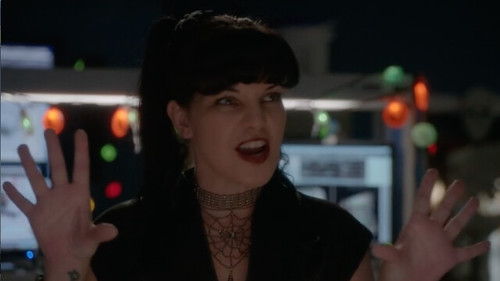 So, a sort of trick, and treat.

Dubbing films is a vile thing to do. It’s OK if it’s for young children who can’t read, but at any other time I hate it. It sounds simple enough, but the ramifications are many.

If you’re an English speaker and move to Sweden you will be fine. You have to put up with subtitles all over your James Bond, but he will still speak the way you expect him to.

If you’re an English speaker and move to Switzerland, you will be less fine. You’ll be lucky if you have subtitles to put up with. James Bond will have a weird new voice, and what’s worse, if you don’t speak French or German there is little point in going to the cinema at all.

I’ve now had the pleasure of cinema in Geneva twice. There is the odd film being screened in its original English/American, but you can’t choose the time or place as easily as if you go for dubbed-into-French films.

And for equality you get subtitles. Not one lot of subtitles, but two; one in German and one in French. I’ve discovered that the temptation to read the subtitles even when you understand the spoken words is great. It’s very hard not to read. The temptation to read is still there even when you don’t know the language of the subtitles. So there you are, listening to your normal actors, while desperately checking what those words look like in two other languages. Three, in the case of the original film requiring subtitles like The Man From U.N.C.L.E. which I saw a few weeks ago.

I liked it, which was surprising as I’d expected not to go and see it out of solidarity with the original television series. But it happened to be Daughter’s film of choice so I went.

The other day we watched The Intern. Not because either of us wanted to, but because we felt like going to the cinema and it was our only option. We’re glad we did, as we enjoyed it far more than we thought we would.

I simply cannot keep up. It used to be bad when September brought all the television shows back. But I used to have maybe only four at the most, and with some of them taking breaks some weeks, you’d catch up with what you’d missed. Or I’d revert to old shows, where I am seasons behind.

We’ve spent the summer hiatus flitting back and forth between The Good Wife and Elementary. But after the new shows came back, we’ve had to leave them. So I don’t know what happens when The Bad Husband stepped outside their flat. I can imagine, though. But it’ll have to wait. In Elementary Watson is getting used to her competition, and Holmes is more annoying than ever. Thought we’d finish Due South once and for all, but there are still a few episodes left. They’re not so good, but I can’t leave a series hanging like that.

We’re keeping up with Doctor Who, although sometimes we wonder why, and with NCIS, where we mostly don’t wonder why. Yet.

We save the Big Bang Theory for when we need cheering up, or when a shorter sitting is required, so that’s less of a problem.

As I write I am one episode behind with Downton Abbey, and since I’m going away for the weekend, I will be two behind on my return. I understand there was blood. Might be a good thing to have the next episode standing by, just to be sure how bad it got. It’s getting silly, but we do enjoy it, and the relaxation makes it worth watching. And the grinning when the Dowager gets to air a few more good lines.

In between all the rest we can usually sneak in some NCIS: Los Angeles, and I haven’t even finished the first season of New Orleans, and won’t be watching anytime soon.

I understand there is something called River on BBC. Missed the first and recorded the second. I wonder how that is going to work out? As for the cinema, I looked up the times for screenings of Suffragette, amazingly on at both cinemas in town. But we had no time…

I suspect it’s the hair. I feel we have lost Gibbs and he has morphed into Mark Harmon over the summer. I know that sounds stupid, but however nice Mark might be, he’s a Hollywood actor and not a federal agent of any kind.

Did Mark grow tired of not growing his hair? I hope it will be cut at some point soon, like in season four. Although that time he was still Gibbs. A Gibbs who’d changed a little, but still basically the same man. The imposter we’re seeing now is an elegant actor, with far too good a haircut. In a crisis you tend not to become better groomed because you look at life differently. You might let yourself go, but not this.

I know it should be about other things, but for me it all comes down to the hair.

And Penny’s hair in the Big Bang Theory? That’s grown too. Admittedly after having been cut short last year, but still. I don’t mind which it is, but back in May we saw her and Leonard going off to get married. And now they started off by getting married, only with longer bridal hair.

It was a bit like the day in 2007 when NCIS Director Shepard’s hair grew several inches in a few hours.

Their gnocchi was the best I’d ever eaten. I’d have told them that if I could have, because it truly was gorgeous gnocchi. The Italian restaurant nestling in the corner of the Mont Blanc bridge and the shore of Lake Geneva looked lovely back in June when I first saw it. But I wanted company to eat there, so Daughter and I went at the weekend, when the weather was still warm and sunny, and a lakeside meal seemed like a good idea.

The – presumably Italian – maître d’ joked about our lack of French and demanded more languages. We gave him Swedish, and he shut up because he couldn’t match it. For a restaurant that has menus printed in English (separate menus, not just English added) you expect a bit of linguistic skill, and they certainly had that. A professional looking waiter soon took our order in impeccable English, and the food came promptly.

And as I said, the gnocchi was fantastic, as was the pasta with salmon. We swapped halfway, so sampled both. The half litre bottle of water soon came to an end, and while it’s positive that they don’t want to fleece their customers by opening two bottles, it’s what we are used to and expected. But you can always order another.

We tried. Oh, how we tried. After half an hour I decided we would go thirsty, because I was just too well mannered to get out either of the two bottles we had in our bags. After another half hour when we’d had our fill of sitting by the lakeside we decided to ask for the bill.

We tried. Oh, how we tried. But we were in that corner, window and all, and nice view, but where they maybe put the undesirables. Was it our unattractiveness? Or simply the fact we had no male with us?

I rather regret not walking out without paying. I wonder if they would have noticed. As it was, I walked up to the maître d’ where he was standing, mid-restaurant, but was prevented from speaking by our now irritated looking waiter. Perhaps they punish waiters whose remiss attention disturbs the king? The bill arrived extremely fast. Great.

Except, you know what didn’t happen next, don’t you? That’s right. No one came for our money, and there is only so long you can wait for non-existent service. Luckily I had the correct money, so I put it on the table and we left.

It’s a shame. The food was great. When they wanted to, they had the right restaurant skills too. I recognise it was a busy Sunday lunchtime. But still. And they could easily have sold us another water, possibly some dessert, maybe even tea. There would have been some hope of a tip, which they clearly wanted, judging by the layout of the bill, despite this not being a Geneva thing. Or so I’m told.

But I can recommend the gnocchi. And the view.