I knew exactly where the painting was going to go. Even before it arrived in the post, planning my birthday gift to the Resident IT Consultant – who likes trains – I knew it would go on the wall, just outside the door by his desk. 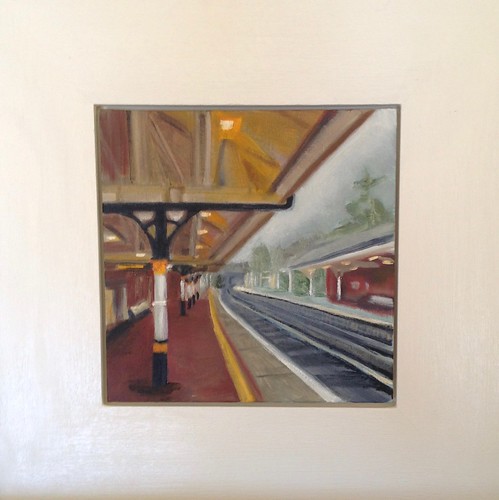 Six months on, it is still leaning against the wall, next to the television. This is less to do with me being lazy and more because I can’t bear to stop looking at it. Where it is now, I see it every time I sit down in my armchair. I like looking at it. I, too, like trains and railway stations and all that stuff.

And let’s face it, I bought the painting because I liked it. Not entirely selfless. The Resident IT Consultant generously said it could hang somewhere better [for me]. But where? In a house that really wasn’t made for more art at all, I first bought this streetscape, which I had great trouble finding space for. It now hangs next to my desk, but I had to re-home the calendar that used to live there. 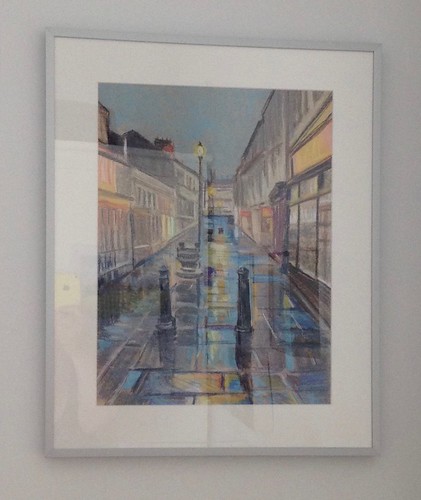 Rachel Ward, who painted both pictures, is a dangerous woman to know. I first met her in her role as a YA author, nearly ten years ago. Those books were good. Now, she paints at least as much as she writes. And she takes photos.

Where some people can barely get out of bed in the morning, Rachel takes the dog for a walk and before my Weetabix is hot, she has put that morning’s photo harvest on Facebook. They are good photos, of attractive landscapes and streetscapes. So as well as painting, Rachel turns some of her photos into cards. And Christmas cards… (You can find her art here.)

As for the railway station, the jury is still out. Where to hang it? Do I need to be able to stare at it in long daily doses?

I suspect the answer is ‘yes.’ The ‘where’ is still unknown.