The one she doesn’t mention

We are not really any the wiser regarding why Pauley Perrette left NCIS. But it’s always possible to deduce something that may be close to the truth. After Abby’s last episode it was as if Pauley had to get it out of her system and she tweeted some very cryptical stuff.

I can see that she wants to save the jobs of her friends still working on the show. Whether the secret is so big and so bad that knowing about it would bring NCIS down is anybody’s guess. Or if she just thinks it would. Pauley had the opportunity of keeping quiet, but I can see that doesn’t sit well with her.

On the other hand, if she really wanted to have a go at someone, she’d have done better to get her act together to say something more lucid and meaningful. That opportunity is now lost.

But, OK, there are tweets saying nice things about most of her co-workers. We can start making our own deductions based on who is not mentioned. In fact, the most interesting tweet was Pauley saying she’d had a long conversation with Don Bellisario.

Because we know how Bellisario was shunted off his own creation. It was always something I felt uncomfortable about, even if he was a slave-driver. But what if he wasn’t?

And who got rid of Pancho Demmings? In fact, who was it who thought that practical jokes were good to play on their fellow actors on the show? Could that have had anything to do with Sasha Alexander leaving?

It’s one thing to have Gibbs the boss in the fictional team, but why should the actor playing him be boss of the team of actors away from the cameras. I felt uncomfortable when David McCallum spoke about Mark Harmon as though he was the one they all looked up to, the one who looked after his gang. If there was any looking up to be done, it ought to be the younger actors to Ilya Kuryakin. He’s the real deal here.

I have clearly read too much celebrity gossip, but there have been one or two bits of information about Mark’s personal past behaviour that always made me wonder what he thought he was doing.

And then there was Dave, the dog.

He is still being blamed for the break-up. But if it was him, there is no explanation for those badly written tweets in the last week. I wish Pauley had taken more care over those. Much can be said while avoiding being libellous.

If it’s actually so bad at NCIS that many wanted to complain but didn’t dare, so it was left to the one who was popular enough that she could, then someone needs to take a deeper look at what’s wrong. On who is wrong.

Whichever way this ends; if CBS had finished the show after season 14, the fans could have looked back and mourned their loss. Now, we will be mourning something far worse, something that will take away any pleasure we’ve had from NCIS over a decade and a half. Either we will [eventually] know, or we will have to keep guessing. I don’t know which will be worst.

I’ve been relaxing with some top-notch season one NCIS. Well, someone has to!

Having previously complimented them on the line ‘I can’t wait to weigh your liver’ there is no reason to mention it again, except I just did, and for the reason that it’s a terrific line. They might not have fully worked out where NCIS was going back then, but they knew how to get there. It’s for stuff like liver-weighing lines and the plot of Bête Noire in general that the early fans were quite so fervent.

I can’t stop being fervent even now, but only as regards the older seasons.

And if part of the reason for writing Bête Noire was to get rid of Gerald, he certainly got a good start to his send-off, without having to be killed. At least, I’ve heard there was someone they couldn’t wait to write out, and Pancho Demmings is the only one who fits the bill. Shame, as I liked him (but clearly slackers can’t be tolerated), but then he was replaced by Palmer, and we like Palmer. 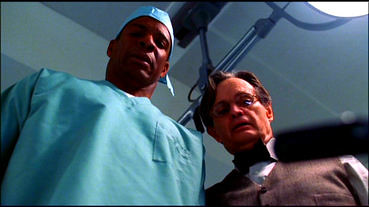 The plot is very good. The writing and the acting likewise. Kate has warmed up as an agent, and how perfect her love affair with Ari would have been had they both not, well… you know. Gibbs talks about ‘his people’ which is only slightly clichéd. Abby gets to be weird, but she has to do that every now and then. And several of the recurring agents like Paula Cassidy and Pacci have cameos.

Not only are they beginning to show Gerald the door, but for Ari the door opens a little. Enough to invite him back in later. He’s crazy and violent, but in a nicely restrained and almost British way. The type who ‘gets’ steam trains and old cars.

Can’t help but wonder if Gibbs would have got on better with him had Kate not been in the middle.

But we know how that ended.

What’s worse, we now know what they are like today. As Son said recently, when he’d finally caught up with season 14, he wondered if they are ‘taking the piss’ and he has no interest in getting to know the new people. He’s lasted this long, but I agree; it’s not new people we don’t like. It’s having these particular new ones thrust at us in one fell swoop.

So, taking a leaf out of Gerald’s departure, maybe someone could be swiftly despatched elsewhere. No need to kill them.

The end of NCIS season two and the beginning of season three are among the very best episodes, and among the hardest to watch. Even though we watched season two late, when we already knew how it would end, it still didn’t make it any easier, or even any more obvious what was going to happen.

So we knew Kate would die, but the way they set up smoke screens, pretending to kill DiNozzo with the plague, and then offering up snakes and bombs and the need to protect Gibbs, meant we were as confused as they wanted us to be. I saw an interview with Mark Harmon on the eve of the last episode, and he claimed not to know who was going to die. It could have been him. Or so he said.

Twilight is as strong an episode as any, and it stands the passage of time well. It’s still exciting to watch, despite us knowing how and who and why. That penultimate shot when we think Kate has died, quickly followed by the killshot is pretty good.

There is humour, despite the fear and the danger. That’s what makes NCIS; the plot as such might be mediocre, but the script and the dialogue is first class.

As for Kill Ari, I had to watch part one three times before I felt even vaguely normal. It’s the one that has affected me more than any other. Yet again it’s the strong writing which makes it what it is, more even than the acting, which is also fantastic.

The team are shattered in more ways than one, it is raining (it always rains when things are bad) and Gibbs is nice. DiNozzo is right, we don’t want a Gibbs who is too nice, but it was quite fun to see what a nice Gibbs might be like. He doubts his own abilities, while the rest of his team daydream about Kate, the way they each saw her.

They have Ari to chase, while fighting the FBI’s view of him as an ally, and Gibbs has his old partner return without warning as his new Director. Ziva turns up and confuses DiNozzo, and we have that priceless scene in Ducky’s Morgan, with the useless Gerald almost wrecking it.

You don’t often get a really bad bad guy who can also be as interesting and as charming and normal as Ari. We sense that he is ice cold and cruel, but there is still a sense of humour.