Strauss at the Musikverein

A week ago the Austrians celebrated their National Day. Daughter and I very accidentally happened to be in Vienna just then and – less accidentally – wanted to have a closer look at the Musikverein than you get from our sofa in front of the television on New Year’s Day. We discovered there was a Strauss concert on that very morning, so booked tickets to go.

It was all we had hoped. The concert hall really is that golden, and they really do cram in as many chairs as they can, wherever they can. We had good chairs on the side, quite close to the stage. 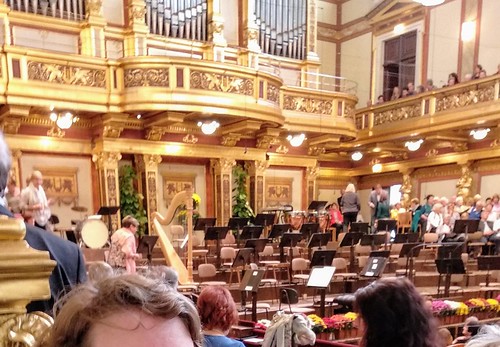 The Musikverein is housed in one of many elegant buildings in Vienna, and it was pretty much as I’d expected. The ushers speak English, and were most helpful. There are wardrobes for coats and larger bags, and there I learned – from the woman on my right (who, incidentally arrived long after me) – that you can say ‘bitte’ and be very very rude. She certainly wasn’t going to wait for anyone else to deposit their stuff, thank you very much! It pleased me no end to discover her halfway down a rather long queue for the ladies’ toilets later on. There are not enough toilets, but this is understandable in an older building.

Plenty of bars, however, and the audience indulged in eating and drinking. I’ve always wondered how they get the audience in and out on time when we see them on television. I’m still wondering that.

We enjoyed the concert. The Wiener Johann Strauss Orchester is no Wiener Philharmoniker, but that was fine. Likewise, conductor Johannes Wildner was no Karajan, but a chatty, bubbly chap who told jokes between numbers. At least I think he did. People laughed. My Austrian German wasn’t up to such detail.

We began with the Overture to Die Fledermaus, through lots of Strauss tunes, ending with Auf der Jagd and An der schönen blauen Donau. Much stomping and clapping rewarded us with another polka and the Radetzky March, enabling us to leave on a high. Daughter hadn’t quite dared hope for the latter, so was very happy.

They offer tours of the Musikverein, but I’d say go to a concert instead if you can. It doesn’t have to be the New Year’s Day one. After all, I don’t expect people can leave on January 1st and proceed to have coffee outside in the sunshine.

Or maybe they can. It’s Vienna, after all.