We’ve not been up to watching just anything, and Disney & Co will only take you so far.

But Staged on BBC One was like discovering diamonds when all you were looking for was limp, used, teabags. We were feeling grotty, but trying to make the best of things with Indian food delivered to the doorstep, when our smiles grew wider and wider as we watched David Tennant and Michael Sheen quarrelling in their respective locked-down homes.

It’s a rare thing when both the audience and the performers are in the same – albeit different – boat. They got to see how the other actors lived, and we got to see how they live, and we – almost – met Michael’s neighbour, and we wouldn’t dream of trying to hide our empty wine bottles. Not that we have any, of course.

David and Michael, ably assisted, or not, by their director and their finance woman, their respective spouses, and sister, and three heavy-weight actors in some great cameo roles. I can just about see myself writing a drama and casting Judi Dench. Although I realise she’d have to turn me down.

All three of us would have said we’d want to watch it very soon again, were it not for the fact that the Resident IT Consultant never says stuff like that, so it was just Daughter and me. But we will. It was like medicine. For the virus.

And their hair grew as we watched. Or so it seemed.

As for pacing ourselves…

I suppose it wasn’t bad that we lasted nine days? Good Omens was great enough that there was a limit to how long we could string it out. (I suppose we could always watch again.) 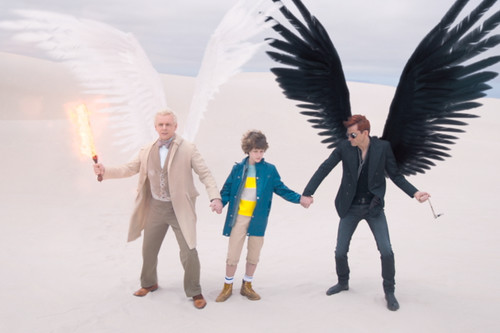 But as a friend said on social media, she hadn’t really seen much chat about Good Omens. Not like there always is for certain other television shows or new films. Whereas she started a bit of a discussion with that, it was still tame, and a few people didn’t know it was on, or what it was on. (That seemed to go for the religious people of America, as well, as they wanted Netflix to ban it…) And someone doesn’t like Terry Pratchett or Neil Gaiman.

We do, though, and we enjoyed all of it. I especially felt that Martin Sheen was Aziraphale. Whereas David Tennant as Crowley was mostly the Doctor, but that’s fine. There wasn’t really anyone I objected to, and you know how unusual that is. As for Dog, he was a lovely hell hound. Or was it the other way round?

The question is, watch again, or read again? I mean, in which order? Come to think of it, Son has the book. I might have to get my own copy, not in the slightest signed by either Terry or Neil.

It felt like a long wait, but now that it’s here I marvel at how they did it so fast. I think Neil hadn’t written the script when the news was made public at Terry’s memorial service. I hope Terry is satisfied with it. With an Aziraphale like that, and Dog, he surely must be? 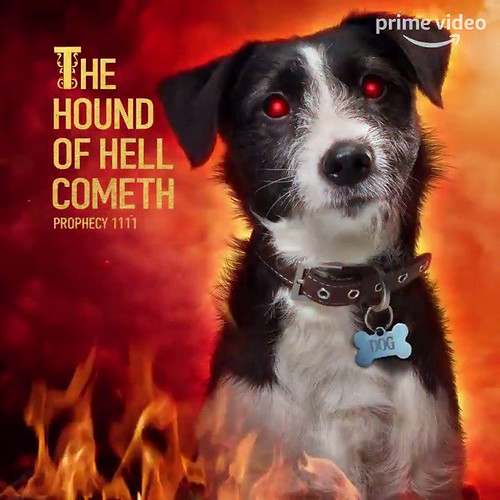 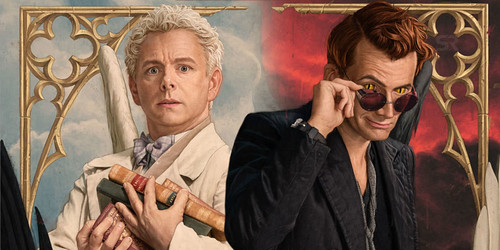 It’s a good start. We watched two episodes of Good Omens on the first day, and we like it. One shouldn’t be greedy and watch it all, but this was a cheering thing.

I’d not been able to think ahead, as to whether Michael Sheen and David Tennant would be right for the roles. They are, though. I remember only enough of the details of the book to know that this is good and fun, and not so much that any dreadful discrepancies are able to howl at me.

But then, do you get those when the script has been written by [one of] the authors?

Now, how to pace ourselves a little..?

Am I the only one who doesn’t feel that the Doctor can have the Tardis for his wife? Even if she is sexy? That said, it was a good episode, and maybe they should ask Neil Gaiman to write some more.

And preferably they should gag the Times who reputedly provided the full plot in today’s paper. Bad enough when they do that in a review after the programme’s been on.

Great to have Rory as ‘the pretty one’. No reason he shouldn’t be. Amy can’t have it all. Fun with the Doctor building himself a new old Tardis. Looked a bit half-built to me, though. And a well spoken baddie is always charming.