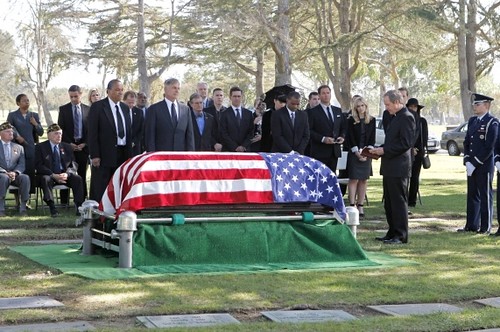 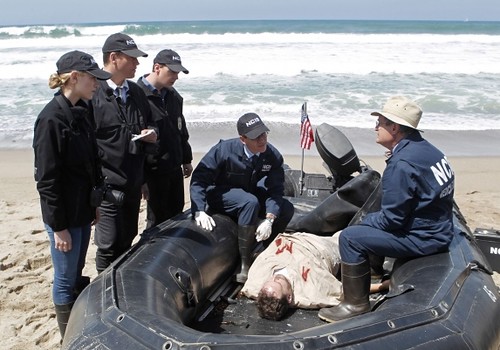 We’re getting closer to a ‘real’ beginning, so time to crack on. I loved season seven. Looking back, I’m slightly less keen on the last episodes. There is something not quite right about the Mexican set-up. A little on the far-fetched side.

But as cliffhangers go, seeing Jackson Gibbs in his shop with Paloma, it’s a good one. The continuation in season eight is less satisfying, especially the way the Mexican siblings problem is resolved. And Gibbs is a bit too remote and unfeeling, seeing as he doesn’t exactly have a clean conscience himself.

We don’t want Gibbs Sr to die. But it’s worth keeping in mind that although the Reynosa family are crooks, they had a right to love their father, too.

But there is humour even in these two episodes. Like when DiNozzo and Ziva are wondering how they will find Gibbs, and he is just standing there, waiting for them. Ducky going on about golf, as you do, while dissecting the dead.

NCIS – Spider and the Fly

You know your life is too exciting when you need to enter your own home doing one of those stiff-armed gun searches for baddies in every corner. Gibbs has plenty of that, and his open-door policy may not help.

I had a theory as to how the encounter between Gibbs Sr and dear Paloma would go. In fact, I had two theories, and none was right. But you could argue that what Gibbs says, courtesy of Mike Franks, that ‘you do what you have to for family’, works both ways. Daddy Gibbs does it, and so does Paloma, of course. Not to mention her charming brother Alejandro.

Gibbs isn’t the only one with a father. DiNozzo has one, and so does Ziva. There are clear markings of things to come, whether there’s a lot of it and slow, or little and fast. Or any other combination. And I do I believe that was a pretend phone call director Vance had with Eli David.

The poor prodigal probie McGee was back from Canada, and Ziva brought her tan lines, or lack thereof, back from Miami. And as Ducky said, ‘don’t get me started on South Carolina’s velvet ant’. Better not, then.

There may have been exploding shop interiors and safe houses, but while Ducky can get his tea-cosy out and have a civilised drink with Abby (very sexy leather straps!) in autopsy, while ruminating on Churchill, all is well.

All in all I think the cliffhanger from the end of season seven was more exciting than the beginning of season eight turned out to be. In fact, apart from the sheer joy of having them all back, it was about the wettest first episode we’ve had. It was compensated for with many of our favourite extras, and a couple of enjoyable baddies. But at this rate I think my prediction that we need Ari back is proving truer than I thought.

Was that who Eli David had found? It wouldn’t be our first fake dead Mossad agent.

I was more nervous watching Rule Fifty-One, than I’ve been since watching the first episode of season 3. Though I needn’t have been, since I had worked out most of the things the right way round, without having any clue as to how they would fit in with the plot.

So, are we going to sit around worrying about Daddy Gibbs for four months or not? I’m getting good vibes at the moment. (Touch wood, obviously.) I have more concern for that viper Ms Hart. They will keep her on, won’t they? How come I like Srta Reynosa better than her?

I’m trying to work out those red-page scenes we heard about. In fact, I’m going to have to watch this again.

Surely this was the first time Franks has called DiNozzo ‘probie’? Not being in the slightest American I seem to be unusual in not finding much of interest in Ziva’s citizenship ceremony. And Vance continues to grow. Gibbs never had that kind of resistance within the agency before.

People appear to feel that Abby’s relationship with Gibbs has changed beyond recognition. I disagree. Changed, yes. But they looked far more ‘back to normal’ than you’d think was possible.

Did not get Ducky’s golfing experience at all, but it was very, very funny. To have that kind of light humour inserted into an autopsy scene, when things are looking generally grim is what makes NCIS what it is.

So, that will be a wait of something like 17 weeks, I’d say. We can manage that. Plenty of repeats available for daily lunches, should I be so lucky.

Gibbs is looking old and tired, and it’s hardly surprising. Things aren’t going his way, much. I wonder whether he will be the one who has the ‘bad ending’ for season 7? Not that they’ll get rid of him, obviously, but we need to be left worrying about someone over the long, and possibly even hot, summer.

After all that speculating on who the dead colleague would be, it came as a surprise to find that it was someone I’d thought of as recently as last week, and someone who we won’t be devastated to ‘lose’, but still leaves us feeling bad. Well chosen, I have to say. And if there are fans out there who haven’t bothered with NCIS: Los Angeles, it may feel strange.

Still can’t decide if Ms Hart is simply stupid, or actually crooked. Looked more stupid than anything this time.

Abby and Gibbs still aren’t back to anything resembling normal, but her lock-down was almost normal Abby style. And trust Ducky to have cottoned on.

It’s odd how so many things come back to Mexico, in one form or another; Gibbs’s guilty deed, Macy, Mike Franks, Colonel Bell and the drugs cartel. Makes you wonder if they plant lots of seeds along the way, or if it’s serendipitous use of the odd thing found lying around. Am assuming that the writer of Patriot Down wasn’t one who had had much to do with Camila Charo before. She seemed to have undergone a personality change, and Gibbs has phoned the bar before. No need to have language problems.

Roll on next week.

What goes round comes round. It really does.

I’m beginning to think that my prayers won’t necessarily be answered by having Ms Hart cease to be. This will be a lot worse than that, which in turn means that my summer will be less comfortable than it should be, and watching re-runs will not be as satisfying as it could be.

We should always trust Abby. If she says something is a bad omen, then chances are she’s correct. I mean, a Mini-Pow? What can a girl do with something that small? Not that size matters. In the least. Objectively speaking. Her Gibbs-o-meter worked just fine, too. As did her saying that her escort could be anyone ‘as long as it’s not McGee’. How could she? Not only was it not kind, but you just know that when you say something of the sort, then it happens.

Slight over-indulgence with stock phrases in Spanish. There are only so many ¡holas! and ¿como estáses? a witch can cope with. But maybe the effect of Alejandro does that even to Abby. ‘Agent McGoo, no?’ Poor boy. Especially after overdoing it on the yoghurt front.

If DiNozzo will retreat to silliness again after last week’s beautiful DiNozzo, he’ll just have to put up with his stupid Random Chatting not going well. “A little self respect’ would be good, as Gibbs said.

Rule no. 40 is a hard one. And the question is whether Gibbs who has always had Abby’s back, will continue to have her back? ‘No matter what.’

I have a theory as to who has to be killed off. And I have theories about other stuff too. All are so bad I’m shutting up. Now.

How many friends can you possibly have? Well, DiNozzo’s ‘friend’ has 2412 of them, but she’s a red herring. In Obsession DiNozzo gets his very own ‘dead man walking’, except it’s not a man, because it’s about DiNozzo. And we know what he likes.

We also know what I don’t like and that is dear M Allison Hart, again. Having achieved temporary employee status at NCIS, I’m rather hoping it will be her who gets killed off at the end of the series. It would solve a lot. Other than that, Ms Hart was only in this episode to pave the way for Mexico in two weeks’ time. And possibly to annoy Abby.

She  – Abby, that is – gets her hand kissed a lot, by smooth Alejandro, from that very same Mexico. Maybe the symposium is there to get Abby to be present when whatever happens happens. So far Alejandro was ‘encantado’. Which is nice for him.

Palmer is really on top, worrying about Ducky worrying, and going in early to work out how the dead body died, seeing it/he was quite well, apart from being dead. Slapping Ducky quite so enthusiastically might count as going too far, but it was rather sweet to see Ducky assisting Palmer. And looking proud that his ‘boy’ had worked it out.

When the ex-boyfriend turned out to be British we all wondered if it was another case of the Brit being the one whodunnit. Lovely as our British villains are, it gets a wee bit tedious on occasion.

But let’s not forget poor DiNozzo, who suddenly works up a nice obsession with the missing sister of the dead body. She’s everything he’s always looked for in a woman. This is a great DiNozzo episode, with our joker being mature and almost everything we know he can be. He does his research quietly and works out what to do, and makes the missing lady not so missing.

But then there is the old KGB poison, and how lovely to have the Markov umbrella incident recycled. At least Gibbs gets to do an arrest in Russian. Sometimes I wish I knew Russian so I could hear how Mark Harmon does. And sometimes I’m grateful I don’t, so I don’t have to.

Lovely heart-to-heart in Gibbs’s basement between him and DiNozzo, who has ‘broken rule number ten again’. It’s the one Gibbs also has the most trouble with, which is a brave admission from someone strong and silent, not to mention downright surly. It even warrants whisky in the nail jar. Or is it screws?

The other Hart in the basement with Gibbs is promising insofar that he ponders that he doesn’t ‘know when I may need to saw a lady in half’. He has a candidate right there.