‘What’s wrong with his face?’ Daughter texted me last week, as we both watched the new NCIS; same time, but separately. I wasn’t sure who the ‘he’ was, being busy wondering about McGee’s face. Seems she was mostly intrigued by Mark Harmon’s eyes, which appeared to have shrunk.

So, had I not been a regular viewer, but had stumbled onto an episode like the second one, I’d have wondered where I’d ended up. There are too many new faces for a show we come to for our long-standing relationship with the team. Old friends, as they have been for many years. Ziva leaving was tough, but she was one person.

DiNozzo was also only one person, but they have dealt with the loss of his mega-personality by giving us two new agents. It’s too much. They are very nice, I’m sure, but this feels like returning to the school or the job you left a few years ago, expecting – hoping – for everything to be the same and finding it’s not.

And it’s not. Not at all. Especially with both Gibbs and McGee as the old squadroom faces not looking quite themselves. Gibbs in a suit on an everyday basis is too formal. 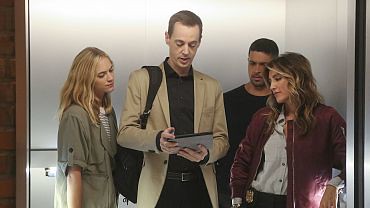 I’m hoping things will normalise. So far we’ve had one introductory episode, letting us know who the people who joined are, except I don’t feel we learned anything much. Too bland, too handsome, no real background. And one episode that looked quite promising to begin with, but lost its zing about halfway.

This way I reckon we’d do better to concentrate on Palmer in jail.

And Gary Glasberg has died. He and his writing will be missed.

Less of the picnics

It’s not often executive producers on television write letters to the fans of their shows to let them know what’s going on. Here is Gary Glasberg explaining what might happen now that Ziva is leaving. (He hadn’t expected it either.)

I think the picnics and barbecues that didn’t happen were Gary’s private ones over the summer. At first I thought he was pulling my leg by suggesting NCIS would be a picnic this season. But what must have happened was a lot more thinking and planning and writing to ‘get rid of’ Ziva.

And I can’t say that this letter makes me believe it’s going to be easy. (Whatever happened to people simply resigning and going to work somewhere else?)

On your six, boss!

NCIS – Till Death Do Us Part

That was some season finale, to the worst season of NCIS (so far). And yet, a quick look at Special Ops tells me people didn’t like it. I thought it was well written – by Gary Glasberg – and that it almost made up for last week. No, it didn’t, come to think of it. But it revived my hopes. Which in itself is weird considering we will now spend four months wondering ‘if’ and ‘who’ and really?’

It is yet more proof that good writing is almost everything, and by letting too many bad writers – or new writers –  loose on NCIS, they will kill off the enthusiasm of millions of fans. It’s a hard thing to achieve, but season nine is halfway there, so let’s stop the bleeding now.

The first and the last episodes of a season must get it right. The beginning of the ninth wasn’t one hundred percent successful, but allowing a character back for the end, sort of closed the loop.

They didn’t use Palmer’s wedding as well as they might have done. And the title of the final episode is apt in more ways than one, as usual. Except I’d like ‘us’ and ‘do’ to change places.

I’m wondering if Dr Ryan’s cool-and-normal to downright certifiable personality was purely down to individual writers? If so, Jamie Lee Curtis must have wondered how the hell she was meant to play the changeable doctor. Gibbs definitely looked more Gibbs-like next to a mostly rational girlfriend. Yes, the son was creepy, but sons often are.

As a hardened fan I am not the first in line to panic, and I will not spend the next four months in despair, but what a marvellous cliffhanger for all the disenchanted fans! More people will want to return in September than not. Good thinking. Although I wish more good thinking had been in operation before now.

Either the Resident IT Consultant is even more forgetful than I thought, or I was especially lucky with last night’s dinner entertainment. With only minutes to go before the pasta was done I hurriedly picked a not much watched episode from NCIS season 7. It being the eve of Mother’s Day in the UK, I picked Mother’s Day, despite my earlier comments about it being the worst I’d seen. At least that meant I’d not watched it over and over again.

Not at all, in fact, if last night’s experience was anything to go by. Maybe we watched it without the Resident IT Consultant, and couldn’t be bothered to offer it up a second time. So serendipity provided me with something 100% fresh for my pasta-eating companion. Nice.

And now that I’ve got both hindsight as well as the determination to see if certain writers write better episodes than others, I have to say that not only was Mother’s Day quite good, but it was written by none other than Gary Glasberg and Reed Steiner. My remaining complaint is simply that this couldn’t (shouldn’t) have happened in real life. Other than that, very well written.

I’ll have to look up other, half forgotten or ignored episodes. There might be treasure out there. Even for a very big fan.

Good solid episode! I’ve not been saying that too much this season of NCIS. And despite Psych Out featuring Kate-who-isn’t-Kate (why does she appear so often now, when she didn’t before?) it didn’t feel as if there was too much of the crime in their midst kind of thing.

I’ll have to start doing what I’ve been pondering for a year or so, which is to keep tabs on who writes the best episodes. Early on, they were nearly all good, but more recently it’s been far too uneven. Psych Out was written by Gary Glasberg and Reed Steiner. Let’s see if their next one is good, or if the next good episode is theirs.

I like Jamie Lee Curtis, and I thought it was – probably – a Good Thing for her to be on NCIS. But I wasn’t sure. I am now. It worked really well, and I just hope they won’t ruin it later. There wasn’t even any of the soppiness in the script when she and Gibbs get ‘more private.’ We have seen so many idiotic women pass through, that I was beginning to despair. But this ‘Head Brain Gamer’ recognised that Gibbs ‘makes people feel safe.’ She likes questions and he likes answers, making them a good couple.

Her Dr Ryan’s meeting with DiNozzo was perfect, as well. He’s an idiot, and she played him just right. Not so sure about Vance, however. And poor McGee had to actually use paper. Is it even possible? As for finally finding Gibbs in the ladies’ toilet. Well.