What can I say? Well, not the title of this film, obviously. I stumbled over the words for the first one, and add a second film and I’ll have to call it Marigold 2. But to get back to the saying; Marigold 2 is as fun and entertaining as Marigold 1 was. I worried in case the usual thing about a sequel not having the surprise element to offer, would mean it suffered.

But I reckon that a film that makes someone like me laugh out loud in the cinema, can’t be bad. (I’ve been informed that Daughter’s peers are not Marigold fans. They didn’t see No. 1 and don’t plan to see No. 2. That’s their loss.) Us oldies deserve more films featuring old people, even if we are delusional when we believe we are Richard Gere or Lillete Dubey. 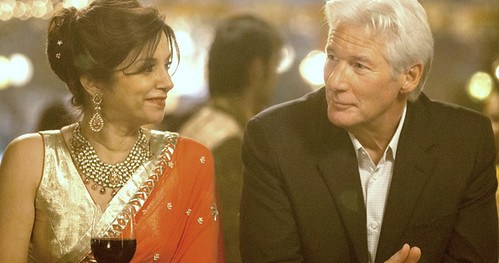 Maggie Smith still gets most of the good lines, whether she’s in India or at Downton. Here we have two women aged 79, who start new jobs and enjoy them. One of them finds new love, and so do quite a few others, even when it takes them a while to realise where true love is to be found.

And inevitably there is sadness, although it is dealt with off screen. It’s as with nudity and sex; more powerful when not seen. Sooner or later we all have to check out, and far better we didn’t waste time dunking a teabag into lukewarm water before we do.

Sonny might be an impossible optimist, and he might get a lot of things wrong, but he also gets things right. After all, whose idea was any of this Marigold stuff?

And I’ll have a beautifully lit up courtyard like this, please.

The Best Exotic Marigold film ever

Better late than never. We were afraid we’d be too late (although not in the meaning of being dead) for The Best Exotic Marigold Hotel, but I suppose it’s a sign of its popularity that it’s still hanging on in cinemas, and even ones near us.

I often find films amusing, but according to Daughter I’ve not laughed this much for a very long time. So thank you to Dev Patel for his inept hotel manager, and to Maggie Smith and Co for being such marvellous old people, and airing their prejudices and overcoming a few. (The thing is I am beginning to feel very close to needing an Exotic Marigold myself.)

In the early days someone described this film in not terribly flattering words, but conceded it would probably be popular with old people. I’m thinking it must have been along the lines of those (men) who reckoned Mamma Mia! the movie was a bit of a loser. Marigold (as I’ve been calling it for some time) is a tremendously wonderful film!

Almost found myself wanting a hip replacement if I could have Maggie Smith’s lovely doctor. Not sure you’d be in a wheelchair for that amount of time afterwards, however. Being able to tell a call centre where they are going wrong strikes me as irresistible.

Wrinkly oldies are attractive. Almost dropping dead, or actually dying isn’t so nice, but better this way than through needless violence. Going abroad for your old age is not necessarily a good idea, but then staying put in the UK didn’t appear to be much better.

As others have said before me, this is a film that is near perfect.