Who was best, the Doctor or Christie?

Doctoring your Agatha Christie… I wish they hadn’t. I didn’t initially remember* the original Witness for the Prosecution, but I gather the BBC added the odd thing at the end, and even when you don’t know the plot intimately, it was pretty obvious that someone had been allowed to go crazy. And I don’t mean the murderer or his unfortunate solicitor. Or even the sad victim who wasn’t the murderer after all.

The first half of this Agatha Christie short story was good and even a little enjoyable, bar the coughing from Toby Jones. Even the beginning of the second half was all right and the plot went in the expected direction. The falsely accused murderer and his ‘wife’ were both excellent. But I did hate the coughing. On the other hand, it was illuminating seeing the importance of good health care and how you can be virtually brought back from the almost dead. Unless you have been murdered. 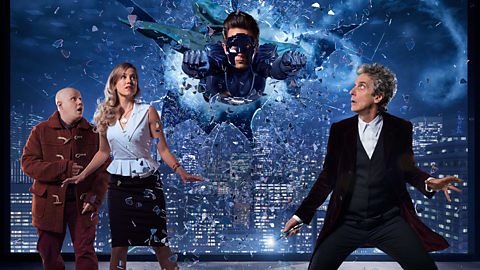 Doctor Who, on the other hand, was a delight from beginning to end. I know people who hated it, but you need to keep in mind that Doctor Who is a programme for children, not adults. Doesn’t stop quite a few of us from liking it, though.

Superheroes, what’s not to like? The baby was a bit weird, but it was the babysitter we had an interest in. And his (her?) mother. Matt Lucas was fine, but I really didn’t grasp his role in all of this. Maybe his task was to look a bit odd and make a few funny comments?

But you know, the Doctor was expected, as he hung upside down outside the boy’s bedroom window. We all expect a visit from an unknown older male at Christmas, don’t we?

I had just about forgotten that we’d not had the Doctor round for the past year. But I’m ready for him now.

*It all came back to me after a while. The 1957 film was much better. And I also now recall trying to get my hands on the book, in Swedish translation, for a friend. It was impossible. I was at the back of a very long queue.