Yeah, I know. There is another week to go for season two of Follow the Money. But, phew, there is a lot happening, isn’t there? 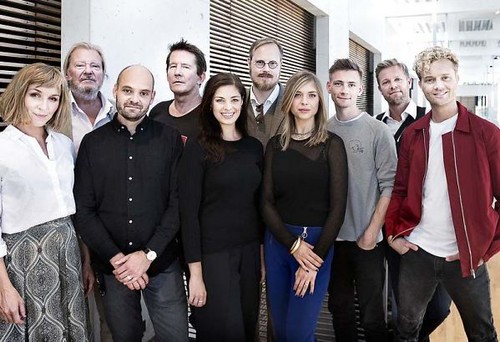 I’d have thought that the time scale of things is fairly tight, in which case Kristina’s pregnancy is moving faster than all those crooks. But maybe not. It could be that they are chasing after The Bank for absolutely ever. Poor Mads, and poor Alf for that matter. They are a bit naïve at times, while astute on other occasions.

For the first time it seemed that Claudia suddenly got scared, instead of merely turning her coat and sailing in the prevailing wind. I can’t decide if I think she’s good or bad.

And it’s so hard to accept that both Christensen and the Swede are bad guys, when previously they have played sympathetic characters. (In US drama, the baddie is ‘always’ British, and here it appears they get a Swede in to do the deed.) Poor Nicky who’s looking for a father figure. He’s so capable, and he should be doing something good with himself. As for Bimse, he’s so forgiving and has his friend’s back, no matter what.

Amanda is a good type. Unusually likeable for a banker with an addiction. But bad Jens Kristian for hiding the fact that he is married. Until that point I liked him (no, not like that). And poor, poor Hans Peter… We didn’t see that coming, but then Søren Malling has had bad luck in the past.

We’ll have to be patient until the last two episodes, especially as we’ll miss them and need to wait even longer than a week. I wonder if anyone will still be standing at that point?

They must have struggled with Benedict Cumberbatch’s hair. It’s not meant to be straight. It was – sort of – but kept waving at the back. Can’t quite get over Gary Oldman’s transformation from Sirius Black to Smiley.

The new Tinker Tailor Soldier Spy is like good coffee or dark chocolate. Not that I use either, but I suspect it’s how it must feel if you do. Like this film. It’s pure art. It’s like being inside a good painting. Somehow.

I can’t say I understood all of it, and I can no longer recollect if I ever read this particular novel by John le Carré or not. Suspect not, but the Resident IT Consultant assured me they stayed close to the plot. But it’s not the kind of film you need to understand. You just enjoy. Immerse yourself.

It probably helps that it was directed by a Swede. I’m not sure why, but it appears to be something Swedes are good at. And Tomas Alfredson strikes me as very good indeed.

As usual the authentic 1970s were too authentic, so to speak. But it looked good. And I’m amazed to see they unearthed some blue cups this time. We’ve had the green ones in every single period film or television programme for decades.