As we grow fonder of the Queen and her family by watching The Crown, Netflix’ own ‘Downton,’ I can’t shake the image of the 90-year-old Queen Elizabeth having to feign interest in cheese in Waitrose in her son’s pretend town. I found that somewhat sad even before this blockbuster soap on Netflix, but it’s seeing ‘first hand’ what this woman had to go through, and all so she could be taken to Waitrose seventy years later.

It’s fun, though, and informative, even for someone who used to follow royal news rather more than I do now. They have done well in finding an actress who convinces as the Queen. Claire Foy is sufficiently non-famous for it to work, while Matt Smith as the Duke of Edinburgh is perhaps a little too much Doctor Who. Although, the same could possibly be said about the Duke. I find myself liking him a lot more now.

I noted that the Guardian review used a lovely Christmassy photo, but they failed to see that the woman in the centre was Princess Margaret, and not the main character (who I suspect was the one hidden behind her husband). But that’s good, as I said, since it indicates the series isn’t full of superstars, who might make us forget the Windsors. 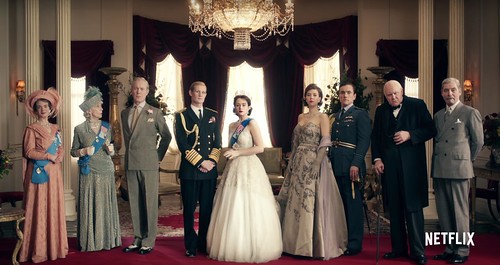 Claire Foy manages the posh accent quite well, but the rest of them get by on just sounding English, which I presume is enough for an American audience. Can’t help but feel that the Duke of Windsor came across a bit Alan Bennett.

So far we have only watched a few episodes, going on the principle that it isn’t good for you to scoff all of it in one or two sittings. We’ll string it out for a week, at least, interspersed with our normal television diet.

And unlike the Resident IT Consultant, I have no problem with a programme featuring people who are still alive. It’s what you do with them that matters.

I wonder of the Queen watches? Does she have Netflix?

On returning to 165 Eaton Place I felt awfully confused. It was a mere year since we were last there. How could I have forgotten? And how come that woman looked so familiar, while still leaving me wondering who on earth she might be?

So, encountering River Song back in 1938 was perfectly normal. They do time travel in Cardiff, after all. It’s thanks to nerdy Daughter that I now know they weren’t in London at all, but in Cardiff. It would explain the Resident IT Consultant’s concern over the hill in the park. No such hills in central London.

But what had happened to the old woman? And did they already have a child? I had no recollection of him at all. Not to mention the lack of a housekeeper. But, I slowly found my footing again and it was fun.

Not as fun as Downton Abbey, which of course is the thing that has come between us and messed with my brain and my memories. But you just don’t kill off the dowagers! And why bring out the ‘shameful’ sister only when she can be a nuisance, rather than a member of the family like everyone else?

Where Downton is soapy, Upstairs Downstairs is probably more ‘realistic.’ Fewer servants seems more normal. Having the butler cook dinner in a tight spot makes sense. And then there is the war. The Kindertransport brought tears to our eyes, with Kristallnacht bringing reality home.

At the risk of sounding too fluffy, there is also the gorgeous Art Deco interiors and the dresses to be considered. Not to mention J F Kennedy being sick. Was it the oysters?