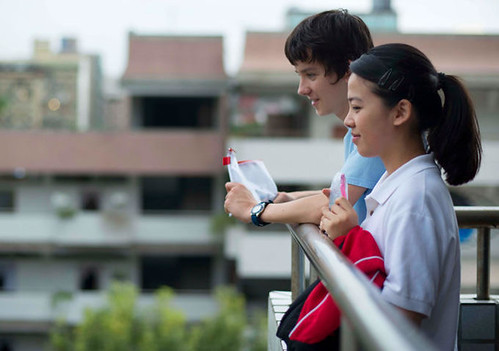 As I always say when children’s books are adapted for the stage; I just can’t see how it can be done. And then when I see it, it suddenly becomes very obvious. Siobhan Dowd’s The London Eye Mystery at the Unicorn Theatre is no different, and it has translated into a wonderful play.

Ted, the main character, is a boy who has Asperger Syndrome, and he is also the narrator of both the book and the play, unlikely though that may sound. He starts by pointing out that one bad thing about the theatre is that there are crowds, and I do so agree with him. Though the crowd on Thursday night was a lovely one, with many young children who went ‘eww’ in unison when any kissing or similarly yucky behaviour took place. The play also encouraged empathy from the audience and the children were spot on when it came to recognising what’s what.

Something the novel doesn’t have so much of is the interweaving of lines from The Tempest, but it adds just the right flavour to the play. The set is interestingly simple and monochrome, trying to look like a pile of cardboard boxes. Some of my companions thought it too simple, but I felt it worked well, and it made you see the acting rather than the set.

Ted’s and his sister Kat’s cousin Salim disappears after a trip on the London Eye, and nobody seems able to work out what could possibly have gone wrong. While everyone else is busy being emotional, Ted looks at all the possibilities, and works his way through his list of things that might have happened. With his unemotional way of looking at the puzzle, he works it out, eventually. He even learns how to cooperate with his sister, and he has a go at lying for the first time.

All parts are played by seven actors, doubling up on many parts, and with the current fashion of colour blindness in choice of actor. We met ‘Ted’ and his aunt ‘Gloria’ before the play which made for an interesting contrast between actor and part, and made Ted’s efforts so much more obvious. I also like the way the cast stopped to ask what we thought of the play as we left the auditorium. I assured Ted’s Mum Faith that I’d love to come back.

In fact, that kind of attitude of friendliness permeates the whole of the Unicorn (it was my first visit), and the ushers were probably the nicest I’ve come across. The programme was both nicely done and brief, and didn’t cost the earth, which is unusual.

For those of us who are friends or fans of Siobhan’s it was a case of sadness, too, knowing she intended to write more books about Ted and Kat. This wonderful drama made the loss feel even greater. As an ‘aspie’ drama this is more important than many neurotypicals may be able to grasp, and my wish would be for the play to go on tour around the country.