To LA or not to LA, that is the question

I’m feeling the pressure here, guys. Every Monday without fail, my stats explode. People clearly want to read my thoughts on the latest episode of NCIS: Los Angeles. And I rarely deliver. At least not with such speed.

To be perfectly open with you, I have the last six episodes just sitting here, waiting for my attention. I can’t decide if I’m going to watch, or if now is the time to give up. The whole show has gone silly.

Perhaps that is what my readers want confirmed? Or are we supposed to celebrate together, delirious with happiness over Deeks and Kensi getting married? Yes, I know they are. Social media has been all over this wedding.

It’s hard to decide. Or rather, I wonder if or when I will regret stopping. But I think back to NCIS: New Orleans. I carried on until Christmas. That’s the first Christmas. Then I stopped, half-heartedly believing I might start again if I grew bored. I haven’t yet. And I discovered recently that they are on season five, or some such impossible number! 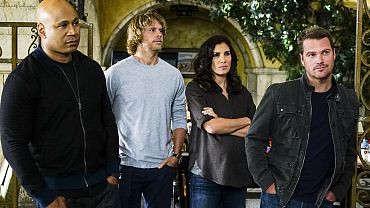 I have invested a lot in LA. They grew on me. I carried on because the characters became my friends. I carried on when it became really far too silly. They rallied a little, and were temporarily better than big brother NCIS. And more recently they were not.

Not in the slightest. It’s become such an embarrassment I wonder the actors don’t refuse to work.

I’m being harsh, I know. But really, this is letting the fans down. It really is.

When I look at the piled up episodes, I feel no curiosity, which is usually how one gives in and starts again.

2 responses to “To LA or not to LA, that is the question”