We were under the impression we were the last people on Earth to visit the new V&A in Dundee. Or, I know some exceptionally cultured people, as ‘everyone’ had mentioned going to, or having been to, the new V&A. Even Pippi managed to fit in a trip to Dundee when she was in Scotland. And Dodo and Son celebrated his thirtieth with a trip to Dundee. As you do.

Pippi mentioned how convenient it was that it’s right next to the station, and it made me wonder how I could not have seen it being built, all those times I changed trains just next to the fledgling V&A. But I realised it was all hidden behind scaffolding and in the dark you see nothing.

The Resident IT Consultant said how it’d be good to go before the Ocean Liners exhibition ended, and I silently concurred. Which is why we went two days before the end, me thinking Friday was bound to be better than the weekend. Maybe it was, but it looked like the whole world was there. Which is odd as I thought they’d already been. Not that there is a rule against going more than once, of course.

We will probably go again.

As I said, the place was heaving, mainly with other old people, and mostly speaking with an English accent.

I hope this was why the place felt as if it could have done with being bigger. The café in the middle was definitely too small. An army of helpful staff improved things, but searching for a table at which to drink tea and eat their gorgeous scones was hard. Actually, I found enough table space. It was just that the chairs had gone walkies, and even as I watched, more chairs went off to join their friends at small tables with too many people around them.

The Ocean Liners exhibition was interesting, but I didn’t linger. The crowd effect meant I couldn’t reach to see or look in peace and quiet. But that was fine. I left the Resident IT Consultant to study it in detail and went to sit outside. Good thing I did, as it meant I didn’t miss the postman. My postman. He was there too. (He’d probably hoped for a Witch-free day…)

Lovely though they were, the scones didn’t last us all day. We had hoped for lunch in the restaurant, but it was booked solid until 3pm, so we went back downstairs, to the moving chairs. The brie croissants were nice, if somewhat soggy. (I’d have put the brie underneath the tomato slices.) 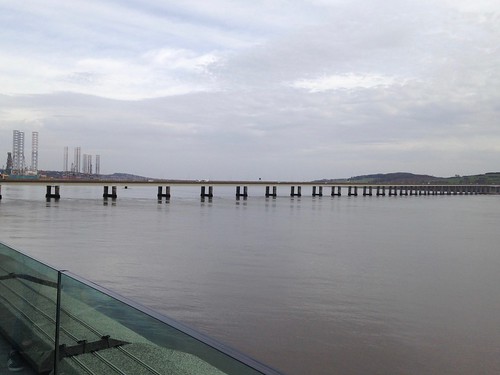 A quick look at the Tay Bridge from the balcony, and then we did the Scottish Design exhibition, which was much better than reviews had led us to expect. Wouldn’t mind seeing it again.

Then it was time to go home, before the Friday travelling crowds made it impossible.

But I’d go back for the scones alone.

This entry was posted in Art, Blogs, Culture, Eating out, Film, Travel. Bookmark the permalink.