I was trying to have my hair cut, when

the fans phoned. I’ve never forgotten the constant ringing of the bloody phone, but assumed it was ‘normal,’ somehow. And here I discover in this morning’s television interview with Gyllene Tider’s Per Gessle and Micke Andersson, that it’s not been commonly known… According to Micke his mother was furious. No, more like annoyed, I’d guess. Siv’s too nice to do furious. She had to hire someone just to answer the phone, because it seems the fans didn’t want to book themselves in for haircuts.

Sorry about the interview, by the way. It’s in Swedish. But you can still enjoy it. Per looks a little wrinkly, but Micke has his parents’ good looks. (I know, because he posted a photo of them on facebook last week, and they haven’t aged at all.)

I was too cool back then to have much interest in Gyllene Tider. And it’s weird to think they are now breaking up for the last time (?) and will set out on their 40th anniversary tour this summer. I suspect I will miss it, just as I have all the others. I don’t do crowds well, nor standing for hours.

I – almost – share their accent, and I believe them when they say that they were always a ‘good’ band. It’s what happens when you have cows outside your house. 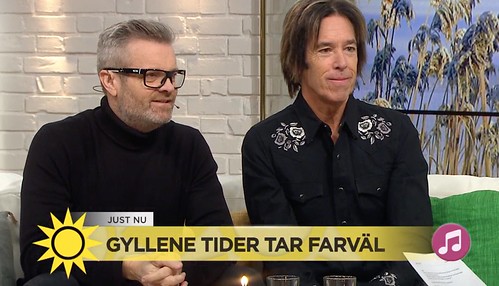 This entry was posted in Concerts, Music and tagged Gyllene Tider, Micke Syd Andersson, Per Gessle. Bookmark the permalink.