It’s amazing how little you see, unless you know to look. After what I discovered yesterday, I’ve spent the morning on some NCIS-based research. It’s anything but complete, and I admit I don’t have access to any official facts, but when a Facebook friend posted a photo of a couple of US magazines to illustrate a point he wanted to make about something totally unrelated, my eyes were drawn to another magazine on the edge of the picture, which prompted me to do a search on the words on the cover of whatever the magazine might be: ‘Harmon drove Perrette off show.’ 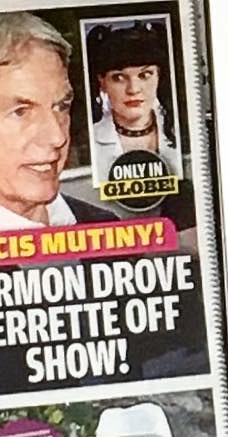 I’m one of the last people I know who would write publicly about something based on gossip, which might very well be just that. But, for once I am tempted to believe there is some truth in what I accidentally came across.

OK, maybe Pauley Perrette didn’t decide to leave NCIS at the end of season 15 because Mark Harmon insists on bringing his pitbull Dave to work with him, or that she’s scared of the dog. What seems clear after more looking into things is that a year before her announcement, Dave took a bite out of someone on the NCIS set. All sources at the time (October 2016) claim Dave has not been back.

But there’s a reason for Pauley’s decision to leave. I’d been intending to speculate a little on this, since short of her being ill, I didn’t have her down as a quitter. She has always seemed to be someone who might well be the last one standing, in fact.

Maybe Dave is now back. Maybe not. Perhaps Pauley complained about him and met only hostility. Maybe she is angry at this. Maybe Mark Harmon is angry about Dave-related issues, or about something entirely different.

Because there has to be a reason why – just like the gossip magazine claimed – Gibbs and Abby are not filmed together in season 15.

All right, a few episodes is not proof of anything, and I can’t believe I never noticed that one is not there if the other is; that there are no more kisses for Abby when she’s done well. Other people visit her in her lab. The one time I found them talking to each other, it was over the phone.

I don’t know. But it makes the public comments from Mark about her departure sound rather hollow. If the set is still really like one big happy family, there would be no need to keep the two in separate rooms.

What’s more, it makes it harder watching older – and happier – episodes, as I found when I happened to catch the beginning of season three last night.

This entry was posted in Television and tagged Mark Harmon, NCIS, Pauley Perrette. Bookmark the permalink.

One response to “Abby vs Gibbs”