Roger Moore died earlier today. He’s not someone I have thought very much about in recent years, but when I was a child and teenager he was right up there with the best.

Most people refer to him as James Bond, but his 007 days were almost a bit late for me. I’d liked Ivanhoe, and I’d loved The Saint, and sort of enjoyed The Persuaders. But that’s quite a bit of screen entertainment from one man, and enough to cover many of my early years.

Roger was a good 007; I think it’s mainly that I was never big on Bond.

But almost nine years ago when Roger appeared in Cheltenham, there was no question but we had to go to his event. He’d just turned 80 at the time, and had a book out, I believe, which is why he appeared at a book festival.

He showed his age, which I suppose is unavoidable, but his acting skills carried him through. The one thing that surprised me was his dislike of Hjördis Niven. Well, no. More that he didn’t mind airing it publicly. 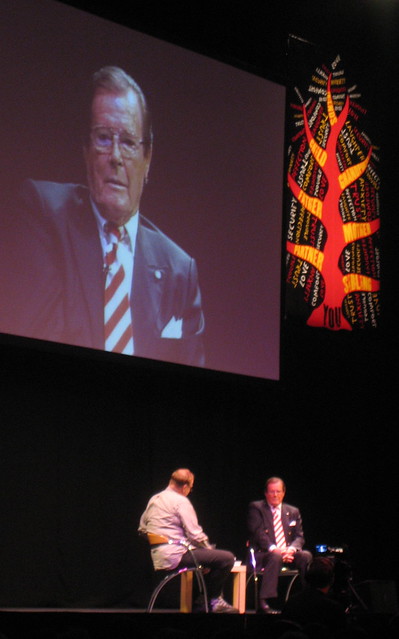 Goodbye to this handsome man who gave us so many screen adventures!