I’d like to think that Miguel Ferrer, who died yesterday, told NCIS: Los Angeles scriptwriters to stick a knife in him. If you know you’re ill and if you are still working, it’s such an obvious thing to do, killing your character in style.

I’m obviously speculating here, which is something I don’t approve of. We’re in a cliffhanger, waiting to see what will happen in LA, but Deputy Director Granger has clearly been unwell, and now he’s not just been arrested but stabbed. As Daughter pointed out, they already have him unconscious in a hospital bed. 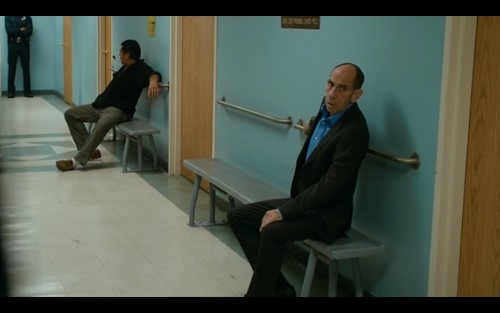 Owen Granger was that kind of character I’ve come to realise I like. By that I mean they turn up and act bad and you hate them and want them gone, and then ever so slowly, they inch their way into the show they’re on and gain respect, and love. (Vance was another one we mistrusted deeply.)

And I wonder if he was brought in, in case Hetty was looking for retirement? In which case we have a Dallas situation, like when they retired the Ewings’ mother and then her replacement died and she herself came back, not as old or tired as had been made out.

Thinking about it now, I feel as if Granger has been – mostly – elsewhere for some time. They are talking about him, but he’s not actually there with the rest of the team. Like Daniela Ruah’s pregnancy, maybe this was planned long ago.

So, it remains to be seen what they do about Granger. I’m assuming they will kill him in the next episode. In which case he died with his boots on.