We left our builders to their own devices and disappeared off for Sunday lunch out today. Son and Dodo were visiting for the weekend and had hinted that a meal out would be nice. (I trust it’s not my cooking?) As usual, Son had money off deals going, and we chose between two old feeding grounds, deciding on Torbrex Inn.

It’s conveniently close and getting there is literally a walk in the park. This is such a rare thing nowadays that you should grab the opportunity to have a pleasant walk instead of always getting in the car. 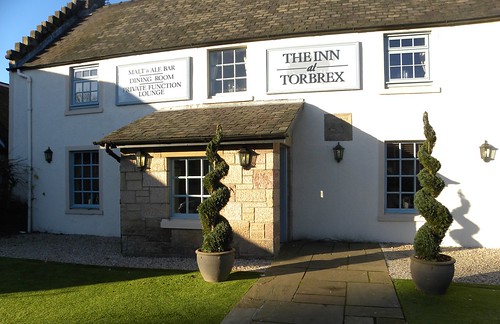 They had their Christmas menu up, and even Son who can be hard to satisfy, felt it looked good beforehand, and we all said how much we’d enjoyed it once the meal was over. (I’ve not had anything else to eat since…)

The Resident IT Consultant was pleased to have an opportunity to order turkey, while Son and I both had the nut roast. Smoked and deep fried cheese for starters was good, as were the puddings. The others had Christmas pudding – obviously – while I grappled with a very nice cheesecake, and ended up not being able to eat all of it.

And then a walk home again, allowing us to feel we could walk off some of those calories. Ten, maybe even twenty?

This entry was posted in Eating out and tagged Christmas. Bookmark the permalink.