I could hear them as I came down the escalator at Waverley station yesterday evening. It wasn’t piped music at high volume, it was a real carol concert in the waitingroom area. Whereas I had intended to sit anyway – spending my spare half hour reading a book and eating my sandwich – I sat down where I could see and hear better.

And I wasn’t the only one. It’s not every dark December eve you have the Scottish Chamber Orchestra Chorus serenading commuters on their way home. Personally I’d be willing to miss my train for this kind of thing. Luckily, I didn’t have to make that decision, as I wasn’t travelling right then. I was able to just sit and enjoy.

There were mince pies on offer. The singers were warmly wrapped against the storm, rather like the von Trapp family. There was the 17.26 to Dunblane from platform ten to contend with, but they sang on, almost drowning out the announcements for departing trains.

I was sitting there thinking ‘if only I had a camera’ when I realised that I did in fact have a camera, because I was on my way to a cultural event. 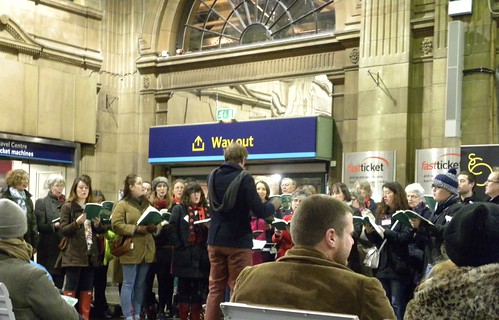 It’s not only that choirs of this kind sing better than most; it’s that they have had the services of someone who knows how to arrange even the simplest of songs. True, most of the carols were from the more serious end of the seasonal repertoire, but I have never heard We Wish You A Merry Christmas sound like that. It’s a song that makes me roll my eyes when 10-year-old boys come to the door, hoping for money for a halfheartedly performed version.

The Resident IT Consultant thinks I’m a fool for not minding hanging around railway stations. Even when all I get is a seat, my own sandwich and my book, I’m satisfied. Having a professional choral concert offered like this is sheer bliss. 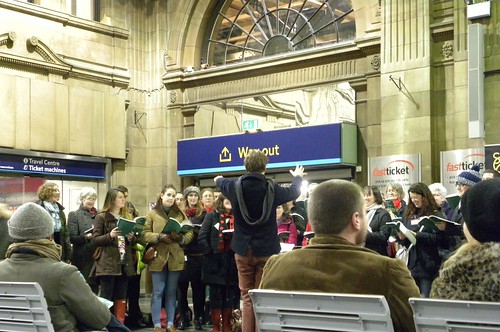