I have long been an admirer of the cool disregard Swedes have for business. I think it’s fine not to stoop too low, killing yourself by working hard all the time.

We went to Sigtuna today. It’s July, the big holiday month. The weather was (far too) warm and sunny. Sigtuna* is a pretty little town, and it was heaving with tourists.

At a quarter to four we decided to pop into one of the cute cafés for coffee and cake, even though it was a little early. We were thirsty and needed to sit down. Cake was lovely. Tea and coffee were good. Then they switched the lights off. And then they discovered we were still in there.

We left. It was obvious they close at four, although why they couldn’t have mentioned that when we ordered, I don’t know. As we exited into the garden, which was full of customers enjoying their afternoon, a member of staff went round chasing everyone out. Someone else held the garden gate open to make sure we all left.

Here you can see the large group of Indian tourists milling about, wondering what to do now. 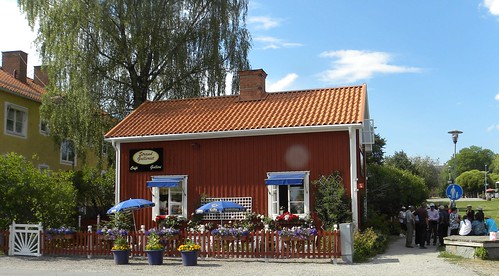 It’s not every business that feels secure enough to evict customers quite so promptly, with not a single apology. The rhubarb cake was nice, but somehow it lost some of its wonderfulness as we filed out.

On the other hand, the park bench we found to sit on was pleasant enough, and no one told us to leave. The ducks chatted to us and the ants made me itch. A small child stuffed his toy down the drain and the girls from the council had to come and fish it out. There was a boat on the lake. It was all very nice.

*It’s where the King went to school.

This entry was posted in Eating out, Travel. Bookmark the permalink.

5 responses to “Past four o’clock”